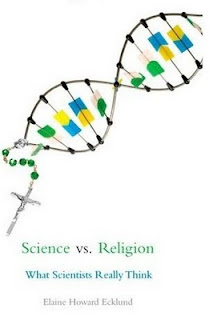 A new study of scientists shows that the age-old battle between science and religion may not live up to the hype. Elaine Ecklund's new book, Science vs. Religion: What Scientists Really Think is based on a study of religious belief and spirituality in the lives and minds of natural and social scientists at 21 U.S. research universities, which involved 1,700 web and phone surveys, along with 275 personal interviews, over a four year period.

From a review by Milton Friesen on the Cardus website:

Much of what we believe about the faith lives of elite scientists is wrong. The 'insurmountable hostility' between science and religion is a caricature, a thought-cliché, perhaps useful as a satire on groupthink, but hardly representative of reality." In highly political, ideological, and moral turf battles, proponents of both science and religion have been guilty of this along many fronts.

What myths does Ecklund dispel? Here are a few:

1. Despite stereotypes, scientists are not entirely irreligious or unspiritual. Around 50% of elite natural and social scientists identify with a religious tradition. That does not mean that they practice their faith in the same way as the broader American public, but it does suggest that faith and spirituality are not absent from the lives of scientific elites.

2. Most scientists made decisions about their spiritual lives before entering science. That means that those without any religious or spiritual commitments may have chosen science because of what they thought; science may not have caused their distance from spiritual practices.

3. Elite scientists who are not at all religious—despite being highly educated, and despite operating in high profile positions—are often very ignorant of even rudimentary aspects of various religious traditions. (Recently, the New York Times reported on the Pew Forum on Religion and Public Life research project, which examined basic religious knowledge in the U.S. In the general population, atheists are more knowledgeable about religion than non-atheists. Perhaps atheists in the general population know more because they are more often exposed to other views, whereas scientists, who can be largely insulated from the public, are not exposed to those ideas.)

4. Scientists are often completely unaware of their colleagues' religious orientation because it is either not talked about at all (being deemed inappropriate within the halls of science) or disparaged, under the assumption that being a scientist means being an atheist or agnostic.

5. Scientists who reject God and religion have similar reasons as the general population: existence of evil and suffering, bad religion, bad personal experiences, and cognitive dissonance.

These myths contribute to Ecklund's mission, which is to "uncover the complex truth about what scientists practice and believe as well as how they encounter and engage (or disengage from) religion in their lives, rather than cede the floor to the hotheads on both sides of this contentious issue."

Ecklund discovered that extreme positions on both sides of the traditional debate have informed the stereotypes we know so well: the atheist scientist who not only declines religion but actively opposes it in a hostile Richard Dawkins/Christopher Hitchens way, and the fundamentalist with fingers in his ears denying direct evidence to protect a cherished belief.

A long civil war of ideology means a loss of future scientific achievement, devalued human purpose, loss of meaning, and an incomplete pursuit of transcendence within the wider culture. Science needs religion, and religion needs science. Fostering genuine learning and dialogue will not mean that the scientific method gets co-opted by religion or that religion is reduced to testable proportions in a lab. Accepting only what can be verified scientifically (scientism) is a wholly inadequate and impossible way to live a life, according to most Americans. Similarly, rejecting all of science in favour of only religiously-derived knowledge will leave the American public open to the very real dangers of uncontrolled fundamentalism, superstition, and regressions of the worst kind.