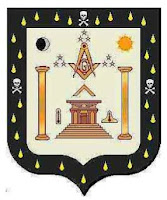 The Patriot Lodge U.D. is the newest lodge to be formed in Virginia in almost thirty years (not including research and daylight Lodges), and was issued its dispensation from the Grand Lodge of Virginia on September 28, 2010. It is an “academic” lodge that focuses its membership on the students, faculty, staff, and alumni of a college or university. Patriot Lodge works closely with George Mason University in Fairfax, VA, and was inspired by the example of The Harvard Lodge.

From the George Mason University paper "Spirit" on August 30th:

George Mason University has become the site of the first “academic” Freemason lodge in Virginia. Formed last fall, the Patriot Lodge has already held meetings and participated in several campus events, according to the “master” of the lodge, Jon Shelton, BA Government and Politics and Russian Studies ’94.

Freemasons are members of a fraternal organization that is formed into chapters called lodges. Many people are familiar with the Shriners, a major branch of the Freemasons, which provides free care to children in 22 hospitals across North America.

The Patriot Lodge meets monthly at the Mason Inn, except for a summer break in July and August. At the monthly meetings, the business meeting is for members only, but the dinner, which features a guest speaker, is open to others.

Past speakers have included Ted Kinnaman, chair of the Department of Philosophy, which sponsors the lodge, and Patrick Mendis, an affiliate professor with the Department of Public and International Affairs who recently published a book titled “Commercial Providence.”

Shelton points out that in the 1970s, the Scottish Rite (another branch of Freemasons) established the Charles and Polly Webber American History Scholarship Endowment at the university, which continues to award $1,000 annually. The lodge is also in the process of establishing an award for graduate students pursuing a philosophy degree concentrating on ethics. The group hopes to award the first scholarship in summer 2012.

“Mason welcomes both the enthusiasm and the history of philanthropy typified by the Patriot Lodge,” says Tom Hennessey, Mason chief of staff. “It further exemplifies the depth and breadth of the diversity that is such an essential component of the university.”

The idea to do something Masonic on campus originated in 2009 from several underclassmen who were already Freemasons. Shelton and other local Masonic leaders then moved to form an academic lodge in order to celebrate their ties to the institution as well as to attract new members from across the Mason community.

The Patriot Lodge U.D. meets on the 3rd Friday of every month (dark in July and August) at the Mason Inn, George Mason University. Meeting starts at 7PM, dinner at 8PM, followed by a speaker, then close the Lodge.

Email ThisBlogThis!Share to TwitterShare to FacebookShare to Pinterest
Labels: Virginia