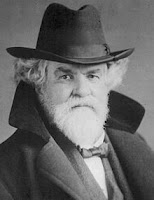 Brother Edward Eggleston (1837-1902) was a Vevay, Indiana, native who died in Lake George, New York, on this day in 1902. Eggleston, whose best known work was The Hoosier School-Master, based on his brother George’s experience as a teacher (George was also a novelist) is said to have ushered in the Golden Age of Indiana literature. Edward was a Methodist minister and a historian, as well as president of the American Historical Society. In 1856, he embarked on a 365-mile walk throughout the American West.

His novels recounting tales of the Indiana frontier were very popular. Other novels included The End of the World, The Circuit Rider, Queer Stories For Boys and Girls, The Graysons, and The Faith Doctor. He bacame a Mason in 1863 in Ancient Landmark Lodge No. 5 in St. Paul, Minnesota. His summer home, Owl's Nest, in Lake George, New York, eventually became his year-round home., where he died in 1902, at the age of 64.
Posted by Christopher Hodapp at Sunday, September 04, 2011

Email ThisBlogThis!Share to TwitterShare to FacebookShare to Pinterest
Labels: biography