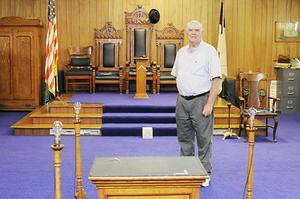 Break-ins at Masonic lodges seem to be on the rise around the country. Or perhaps they're just getting reported in the press more. Either way, the Masons of Palmyra Lodge No. 184 in Palmyra, Michigan just want their Bible back.

Who has a 150-year-old Bible belonging to the Palmyra Masonic Lodge?

“I’d like to have the old Bible back. Every meeting we used it,” said lodge secretary Eldon Clingaman of Palmyra.

He means every meeting since the lodge was chartered on Jan. 12, 1866.

Clingaman said the large, 31/2-inch-thick Bible was taken during a July 20 break-in of the lodge building on Lenawee Street in Palmyra. He said he believes 1859 is the date it was printed.

Lodge members were in the building on July 20. The next day Clingaman found a window broken out of a door. Someone got in and tossed around a box of food the lodge collected to donate to an emergency food pantry, he said. There was some other minor damage, but everything in the building is accounted for, except the Bible.

“It’s the only thing I could find missing,” he said.

A Lenawee County sheriff’s deputy made out a report on the break-in. But there has been no luck in tracking down the Bible, said Undersheriff James Anderson.

“That Bible probably isn’t worth much on the market, but it means the world to them,” Anderson said, referring to the lodge members.

No witnesses have yet come forward and there is no solid evidence pointing to any suspects, he said. Anyone with information that can help in recovering the Bible can call the sheriff’s department’s tip line at 266-6161 or 877-276-8477, he said, and remain anonymous if they wish.