A belated congratulations to the Prince Hall brethren of Texas on the opening of the Wilbert M. Curtis Texas Prince Hall Library Museum in Ft. Worth back at the end of June.

From Museum of African-American Freemasonry opens today at Prince Hall Grand Masonic Temple in Fort Worth by Terry Evans in the Star Telegram on June 25th:

Treasures from the 136-year history of African-American Freemasonry in Texas will be unveiled today with the grand opening of the Wilbert M. Curtis Texas Prince Hall Library Museum.

The museum in the Prince Hall Grand Masonic Temple, 3433 Martin Luther King Freeway, opens at 9:15 a.m. with a ribbon cutting.
For more than a year Curtis, the lodge's grand master, led the effort to create and fill the museum, said Frank Jackson, the lodge's grand junior warden.

"Everyone who wants to preserve artifacts from their Texas lodges can send them here," Jackson said.
Plenty of people have, said Willie High Coleman Jr., chairman of the lodge's charitable foundation. Some of it is genealogical gold.
"We have records of membership applications," he said. "The applicants would have to tell everything about their families. For some of them, there's no other record that thorough."

The Lodge Room displays ornate furnishings and ritual items used by Prince Hall members for more than 60 years.
The collection includes an 1876 charter for San Antonio Lodge No. 1, the first lodge in Texas. Along one wall are massive portraits of past grand masters.

Smaller portraits depict such lodge members as William "Gooseneck Bill" McDonald, the first African-American millionaire in Texas.
"Gooseneck is probably the reason that the Prince Hall Grand Lodge is in Fort Worth," Coleman said. 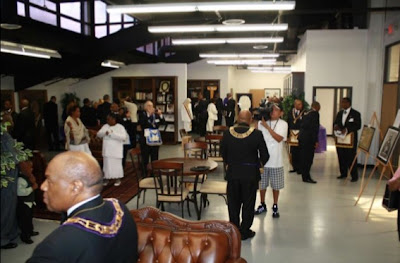 The Library Museum adds an- other repository for the collection of Prince Hall Masonic History in the city. It will possess collections and preservation of Prince Hall Masonic History and activities in Tarrant County and throughout the state in the form of photos, paintings, books, articles, original lodge charters, cornerstones, ledgers, uniforms, a Lodge Room, etc. Many of the items date back to the late 1800's.

The original design of the Library Museum was conceived by Nicole Hawthorne, daughter of Past Master Benny Tucker, the Chairman of the Archives Committee.

Hawthorne, a graduate of Baylor University with a Bachelors of Art in Interior Design, had been performing interior design since 2007. She was asked in June 2010 by her father to produce some drawings.

According to Hawthorne, she wanted to create something that reflected what the space would be used for. “I wanted the look and feel of the area to resemble a turn-of-the- century, new world library. The antiquated, over-sized portraits displayed there were inspiration for the rest of the design and eve- rything else branched from them,” said Hawthorne. “The design of the Library Museum was intended to be like a time capsule with a rich historic atmosphere.”

The mission of the Wilbert M. Curtis Texas Prince Hall Library Museum is as follows:

To collect, organize, describe, make available, and preserve primary and secondary resource materials emphasizing the histori- cal documentation of the M.W.P.H.G.L. of Texas and its impact on the cultural milieu on the broader local communities, the state of Texas, the Jurisdictions under its authority and the larger of such records.

To serve as a resource and research center to stimulate and promote creative teaching and learning through the use of primary research materials; and pro- vide instruction in the use of those materials.

To promote research and scholarship by providing access and encouraging the use of its collections by members of the Masonic Family and the public at large.

To implement records management by formulating policy and procedures that will ensure the collection and preservation of the Library Museum’s materials.

The Library Museum is available to the public by appointment Monday thru Thursday from 10 a.m. - 4 p.m. Information about the Library Museum can be obtained by contacting the Grand Lodge Office at 817-534-4612 or by visiting www.wmctphlm.com.


The Library is open for research to Masons and non-Masons. The Library staff is available to provide some assistance for on-site visitors. While the stacks are closed, the staff will assist researchers in using the card catalog, computer database catalog, and finding aids to access whatever information may assist in answering the patron's questions. Photocopies of Library material are available at a cost of $0.25 per copy.Any Texas Master Mason in good standing with a lodge under the jurisdiction of the Wost Worshipful Prince Hall Grand Lodge of Texas may check out up to two books at a time for a period of one week.