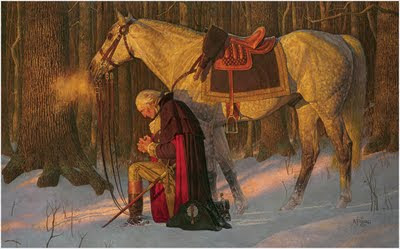 Each year, the White House Historical Society, the Mount Vernon Ladies Association and the U.S. Capitol all offer collectible Christmas ornaments through www.whitehousechristmasornament.com. The 2011 Mount Vernon ornament features a snow scene of Mount Vernon on one side, and artist Arnold Friberg's (1913-2010) famous 1975 painting of George Washington and "The Prayer at Valley Forge" on the other (oddly uncredited to the artist on the website). 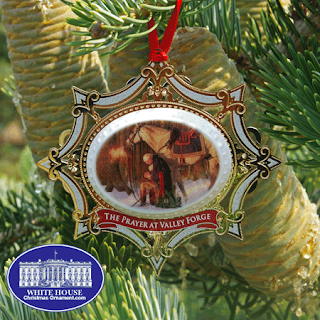 The ornament is available for $28.

The story of Brother Washington praying in the snow comes from a diary of Isaac Potts. From the website:

Isaac Potts, 26 years old, was a resident of Valley Forge, and as a Quaker was opposed to the war. He supervised the grinding of the grain which George Washington ordered the neighboring farmers to bring to his army. The fullest account of Potts' testimony is in the "Diary and Remembrances" of Rev. Nathaniel Randolph Snowden, a Presbyterian minister and a Princeton graduate (Original Manuscript at the Historical Society of Pennsylvania; Call no. PHi.Am.1561-1568).

"I was riding with him (Mr. Potts) near Valley Forge, where the army lay during the war of the Revolution. Mr. Potts was a Senator in our state and a Whig. I told him I was agreeably surprised to find him a friend to his country as the Quakers were mostly Tories. He said, "It was so and I was a rank Tory once, for I never believed that America could proceed against Great Britain whose fleets and armies covered the land and ocean. But something very extraordinary converted me to the good faith."

"What was that?" I inquired. "Do you see that woods, and that plain?" It was about a quarter of a mile from the place we were riding. "There," said he, "laid the army of Washington. It was a most distressing time of ye war, and all were for giving up the ship but that one good man. In that woods," pointing to a close in view, "I heard a plaintive sound, as of a man at prayer. I tied my horse to a sapling and went quietly into the woods and to my astonishment I saw the great George Washington on his knees alone, with his sword on one side and his cocked hat on the other. He was at Prayer to the God of the Armies, beseeching to interpose with his Divine aid, as it was ye Crisis and the cause of the country, of humanity, and of the world.

"Such a prayer I never heard from the lips of man. I left him alone praying. I went home and told my wife, 'I saw a sight and heard today what I never saw or heard before', and just related to her what I had seen and heard and observed. We never thought a man could be a soldier and a Christian, but if there is one in the world, it is Washington. We thought it was the cause of God, and America could prevail."

I have a personal fondness for Friberg's painting, and I presented a framed print of it to my mother lodge, Broad Ripple No. 643, on the occasion of its 100th anniversary in 2001. Friberg was a successful commercial artist after WWII and studied under Norman Rockwell. In 1953 he was hired by Cecil B. DeMille to create preproduction paintings for the epic The Ten Commandments, for which he was nominated for an Academy Award.
Posted by Christopher Hodapp at Tuesday, August 02, 2011