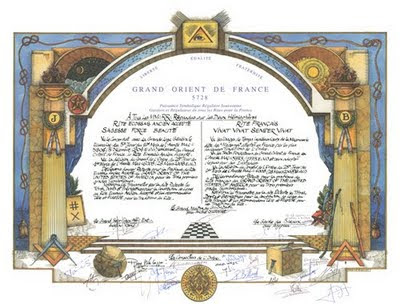 My email inbox has been inundated today with messages saying that the Grand Orient de France has voted this weekend to withdraw its treaty of amity with the Grand Orient of the United States. I have no real independent verification of this today, but if true, it's not a good development for the GOUSA, as the GOdF was about the only Masonic jurisdiction of any size or reputation that recognized them.

The Grand Orient of the USA was formed in 2005, and received a patent from the GOdF in 2008. In spite of wildly shifting claims over the last five and a half years, it is unclear how many lodges are really at work under the GOUSA, and how many members it has, outside of Halcyon Lodge in Cleveland, Ohio. Needless to say, it is considered stunningly irregular by mainstream Masonry.

The Grand Orient de France is the largest Masonic obedience in that country with approximately 50,000 members, and is not recognized as regular by the vast majority of mainstream Masonic grand lodges around the world, primarily for its policy of not requiring members to have a belief in a Supreme Being, and more recently for allowing lodges to accept women as members.

If you are not a Mason, and are looking to join the Freemasonry that is recognized the world over as regular and the legitimate heir to the traditions of the lodges that formed the first Grand Lodge in London in 1717, click here to find the regular, recognized grand lodge for your state or region, as well as links to the historically African-American grand lodges of Prince Hall Freemasonry. Be aware that membership in groups like the GOUSA does not allow you to travel and visit more than a tiny handful of their own new lodges, and that the overwhelming majority of the world's Masons will not regard you as a legitimately recognized member. Only you can answer for yourself how important that is to you.
Posted by Christopher Hodapp at Sunday, June 05, 2011