GLNF Meltdown: Grand Lodge of Ireland Rumored To Be Next 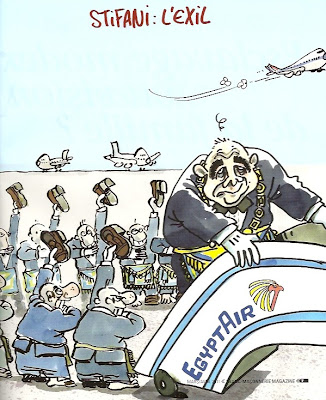 Word is trickling in that the Grand Lodge of Ireland may announce this week that it is withdrawing recognition of the Grande Loge Nationale de France (GLNF), in the wake of six other European GLs so far this year (Poland, Austria, Switzerland, Luxembourg, Germany and Belgium).

In addition, the United Grand Lodge of England meets this month, and the issue will undoubtedly be on the agenda. There are also suggestions that the Grand Lodge of Scotland is considering severing its "auld alliance" as well. Losing recognition of the Anglo GLs will be symbolically catastrophic to the GLNF, as it was UGLE that aided in its formation and growth after WWI, to the exclusion of the long-established and perfectly regular Grande Loge de France (GLdF).

No U.S. or Canadian GLs have yanked recognition of GLNF. Yet.

Meanwhile, GLNF Grand Master François Stifani continues to cling to his position as the obedience disintegrates around him. I can't put my finger on which simile best describes the spiraling mess. A scorched earth policy, as he continues to either expel or accept the resignation of waves of grand officers and representatives, along with hundreds of members (including the Grand Secretary and the ten member Council of Sages resigning, and 14 provincial GMs expelled in May)? Rearranging the deck chairs on the Titanic, with a court appointed administrator up in the wheelhouse? Or just whistling through the graveyard, as the zombie army approaches?

The GLNF is supposed to hold its General Assembly at the end of June, and the Paris court has ordered a carefully monitored election, along with demanding a financial audit of all accounts. Sounds serious, but the internal officers in charge of the audit last week sent a letter to the administrator saying they just need a little more time, since they've only had six months or so...

And of course all of this continues to be gleefully played out in the French media, to the embarrassment of all French Masons.
Cartoon from Franc-Maconnerie Magazine, No. 9, April/May 2011.