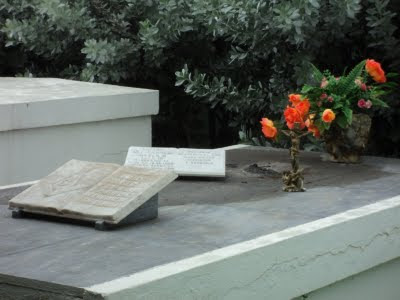 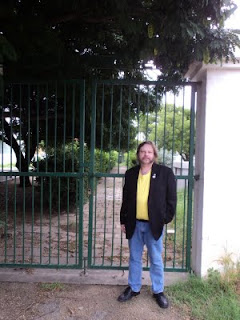 I got the chance to see Acacia Cemetery in Oranjestad, Aruba when I was there last November.
Given the themes of mortality found in Freemasonry, along with the 19th century growth of fraternal burial societies, it's not uncommon to find Masonic cemeteries all around the world. They can be small and simple, or quite elaborate. Unfortunately, too many of them have fallen into disrepair, and new stories abound telling similar tales of lodges that are no longer able to maintain them, or the corporations that once ran them that have disappeared, or just plain run out of money.
In my hometown, there was a Masonic Burial Ground Association of Indianapolis organized in 1873, when they purchased a lot within venerable Crown Hill Cemetery with 300 burial plots. I have been unable to find out when the association was dissolved, but it's on my list of things to find in my copious free time. Meanwhile, on the far east side of the city is Washington Park Cemetery East, which was established as a Masonic cemetery in 1922. 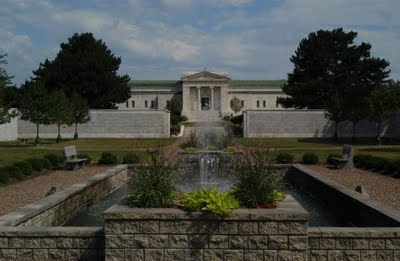 It was established in 1922, and there are many overt symbols of the fraternity on the grounds and its buildings. Matching obelisks mark the two entrances to the grounds, and each are adorned with statues depicting a broken column. One includes a statue of "Faith," and the other the "Weeping Virgin" holding a sprig of acacia.

Squares and compasses can be found on doors, gates, and stained glass windows. The main mausoleum's chapel is constructed in the form of a lodge, with a marble chair for the Master.

For a photographic tour of the cemetery, see Matt Hucke's Graveyards of Chicago website.
H/T to William Witkowsky
Posted by Christopher Hodapp at Monday, June 13, 2011