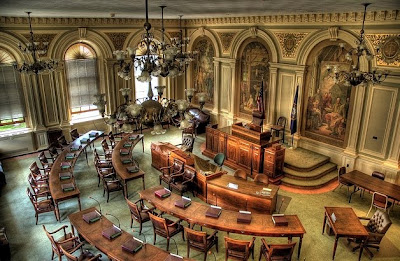 Affinity lodges, university lodges and special purpose lodges are sprinkled across the U.S., and they are all fascinating. Some have prevailed for years, and others have slipped away. In Indiana we briefly had a special purpose lodge that met in the temple of my own Mother Lodge: Transylvania Lodge U.D. met once a year, on Halloween, specifically to donate blood to the local blood bank. Its Master, a very tall, distinguished Brother, wore an Inverness cape, and was fondly known by the nickname "Drac." Sadly, when he died, the lodge closed.

New Hampshire's General Court Lodge No. 1784 has an unusual purpose, as well.

General Court Lodge is a special lodge under the jurisdiction of the Most Worshipful Grand Lodge of New Hampshire of Free & Accepted Masons, chartered in 2006 as a lodge where Master Masons serving or working for the New Hampshire House of Representatives or State Senate may meet during the legislative session, from January to June. We currently have 52 Charter Members of General Court Lodge, all of whom have either served in the legislature or worked there. In New Hampshire, both bodies comprise the General Court and the state constitution enabled the creation of the legislature in 1784, which is how the name and number of this lodge were arrived at.

It was the first new lodge chartered in New Hampshire in 23 years, and it is the only known lodge in the country of Master Masons who were elected as State Representatives or Senators and their staff. In 2007, the lodge was granted dispensation to hold its meeting in Representatives Hall at the State House in Concord.

On Tuesday June 21, 2011 at 6 PM, General Court Lodge No. 1784 F&AM will hold its annual meeting in the New Hampshire State Senate Chambers (photo above). According to Brother Paul C. Smith:

"While this is nothing new, an Arkansas lodge having done this last year, it is I believe the first time that a lodge will have met in both bodies of its legislative branch (we met in the House Chamber in 2007). If any Mason is in New Hampshire that evening and wishing to attend, please do; the State House doors will be locked at 5:45, gavel will ring at 6 PM and we will attend to our program."

The lodge normally meets in the Concord, NH Masonic Temple on the 3rd Thursday of the month, from January to June.
Posted by Christopher Hodapp at Thursday, June 16, 2011