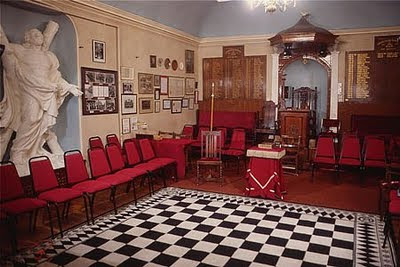 Scotland's Dalkeith Kilwinning Lodge No. 10 claims to have the oldest continuously operating Masonic temple building in the world. With portions of its home dating to 1766, it has withstood the lapse of time. Unfortunately, the ruthless hand of ignorance has reached out and done it serious damage. On Tuesday, thieves climbed to the roof and tore off lead shingles, with a scrap value of just £50 (US$80).

The vandals also damaged a children's nursery next door when they hacked newly-planted trees in half.

Club treasurer, Alex Turner, said a caretaker had discovered the extensive damage last Wednesday morning while he was inspecting the fire exits.

Mr Turner, who lives in Dalkeith, said: "I don't know why somebody would do this, are people getting that desperate in this economic climate? They've ripped away around four yards of lead that isn't even worth too much.

"In doing that, they've damaged the roof and the bricking and tiling. Police told me the lead was only worth about £50. The nursery next door was meant to be having a graduation ceremony in the hall that day.

"The caretaker let them in and he was showing the teachers around the fire escapes when he realised one of the doors was awkward to open. It was being blocked by a piece of masonry that had fallen from the roof.

"Part of the building dates back to 1766 and it is the oldest operating Masonic temple in the world. The lodge is an impressive building and it has a lot of history attached to it.

"It's clear they've done a lot of damage because they didn't know what they were doing, they've just ripped at the lead."

President Samuel Mitchell added: "As I understand it, this is quite a widespread practice. The lead will be worth something in the scrap metal industry."

It has been estimated that repairing the damage will cost around £100,000 due to the age and construction of the building.

Extant records of the lodge date back to 1736, the formation of the Grand Lodge of Scotland, but it was mentioned as an Operative lodge in records as early as 1681.

(Not to wade into a Scottish argument, but Canongate Kilwinning Lodge No. 2 in Edinburgh also lays claim to the "oldest" purpose-built Masonic lodge building, with the Chapel of St John opening in 1736.)

Email ThisBlogThis!Share to TwitterShare to FacebookShare to Pinterest
Labels: Scotland