Liquor and Freemasonry in Indiana 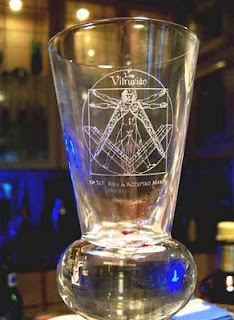 In the History of Freemasonry in Indiana by Daniel McDonald, published back in 1898, there is an entire chapter dedicated to the history of Indiana Masons and the banning of liquor in lodges. Liquor was quite common in Masonic meetings, or post-meeting meetings from the date of the fraternity's beginnings in the Hoosier state. It was not uncommon for hosts of grand lodge gatherings to be reimbursed for their alcoholic refreshments.

That all changed in the post-Morgan era and the cataclysmic Masonic year of 1843 (when other madness afflicted Freemasonry in the wake of the Baltimore Convention). In that year, Indiana passed the first Grand Lodge rules outlawing "intoxicating liquor as a beverage" in lodge rooms, followed by strictures against admitting members who worked in distilleries, bars, or for alcohol distributors. Masonic charges could be filed against members who so much as delivered wagonloads of apples for the making of hard cider.

Briefly, sanity returned in 1874 when, based on the fact that states like Ohio, Illinois, Missouri, Kentucky, Pennsylvania, New York and many others did not regard liquor in the lodge as "evil," so it therefore could not be a Masonic offense in Indiana. The reasoning (certainly sound in MY opinion) was that "nothing should be declared a Masonic offense in Indiana that was not an offense wherever Masonry existed."

That didn't last long. A year later, the assembled Grand Lodge disagreed and reinstated the prohibition we have with us today.

What is interesting is the reaction of other jurisdictions. According to McDonald, Indiana was "soundly excoriated" by many grand lodges in America and elsewhere for "turning the Institution into a total abstinence society."

The Grand Lodge of New York had the following official reaction, and they were not alone:

From this action we totally dissent. It is not Masonic law. Nor has the Grand Lodge of that jurisdiction any right, nor the Grand Master any right, to enforce any such rules. The Institution of Freemasonry teaches the virtue of temperance, and punishes the offense of intemperance and excess. Our rituals are filled with exhortations forbidding the abuse of strong drinks, but their use as a beverage is nowhere forbidden. This new crusade is not warranted by the rules or traditions of Ancient Craft Masonry, and cannot be sustained as lawful Masonic action."

In 2009, the Grand Lodge of Indiana restored partial sanity by allowing temple associations to rent their facilities to groups with proper liquor licensing to serve alcohol at non-Masonic events, at least making it possible to make our facilities more attractive to the community for wedding receptions and other functions. But the traditional use of wine at table lodges remains forbidden here.

By the way, at the 139th Annual Communication of the Grand Lodge of Utah in February, a state known far and wide for its prohibitive liquor laws, the use of wine for ritualistic purposes was authorized.
Posted by Christopher Hodapp at Saturday, June 04, 2011