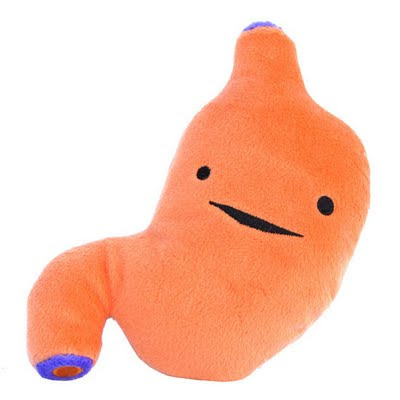 The mail yesterday brought a delightfully deranged gift from my friend, W:.B:. Andrew Hammer in Virginia. Yes, it's a plush, stuffed stomach. Biggest laugh I've had in weeks.

As I have publicly announced last month ("Yes I have cancer. You thought I was a Scorpio."), I was diagnosed with stomach cancer at the end of March, and I started chemotherapy about two weeks ago. The treatment is aggressive to keep the cancer from spreading.

I have discussed my traveling schedule with my oncologists and surgeon. In the beginning, they advised me to "keep to my usual routine." I don't think they fully comprehended that my usual routine was to take week-long driving trips, sleeping in the back of a van, hauling book boxes around, getting up at 7AM for a Masonic breakfast with lunatic early risers, while being kept out until 2AM by far more rational night owls. While they are understanding of my situation, doctors seem bizarrely more concerned with keeping me alive than they are about me swanning about the countryside. And I misunderstood the regimen schedule when this saga began- it's considerably longer than i thought. So, I have now been advised to cancel my traveling events in May and June.

Skipping over the ickier details, the plan is to kill as much of the tumor with chemo as is possible for an initial nine weeks, hack out the part of my stomach that is affected, replumb the whole mess, and follow up with another nine weeks of chemicals. That puts the surgery at approximately the end of May or beginning of June. In the meantime, I'm wearing a portable chemo pump around my neck, that's about the size of a 1970s cassette deck.

I'm not used to having my wings clipped, and this was supposed to be a very busy spring and summer. But I'm told I need to shut my squeakhole about the inconvenience, and be a little more upbeat about the "not dying" side of things.

This does NOT mean I am getting worse—quite the opposite. Everyone has been quite positive and optimistic, and most important, no one has taken Alice out in the hall and suggested a long, final Caribbean cruise, and maybe a nice party where everybody brings a funny story about Chris. But I am being sternly warned about fatigue, weight loss and other side effects, and just the simple technical challenges of traveling, versus trying to keep to the chemo treatment regimen.

I apologize for waiting to make these scheduling decisions until now, which puts many brethren in a bind for their events, but my health issues and answers have been changing on a daily basis, with lots of unknowns. I hope you understand. I will be happy to help any of you find a substitute, unless you want to try to reschedule in the Fall. I'll do whatever I can to attempt to assist from my end.

I remain the luckiest guy in Freemasonry, and Alice and I both appreciate the literally hundreds of emails, letters, cards, phone calls, and stuffed stomach toys that have been coming in. In spite of my grousing, early detection of this condition, along with the friendship of all of you, have been the greatest gifts for which I am truly thankful.
at 4/17/2011