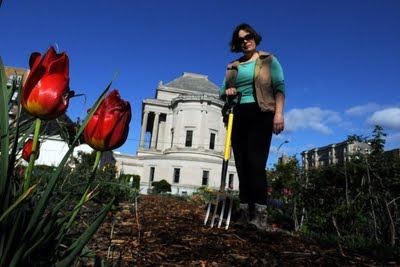 The Scottish Rite SJ's Washington, D.C. headquarters, the House of the Temple, is in the midst of a huge multi-million dollar, multi-year renovation project, to preserve and renovate the 100 year old building. For almost 20 years, the HOT has been a good neighbor to the surrounding community, and allowed area folks to use a large plot of land adjacent to the parking lot as a community garden. Flowers, herbs and vegetables have been growing in the Temple Garden since the early 1990s.

With the renovation project underway, the land is now needed for supplies, parking, craftsman trailers, and the general detritus of a major construction project. Land within the District is not exactly plentiful and the existing spaces in the HOT's lot are not sufficient for the added space needed. Unfortunately for the neighbors, the garden has to give way to the rightful owners of the property. And that's not going over well with a few of the gardeners, who have taken their story to the press. Comments on the Temple Garden website make it clear that most of the gardeners understand the situation, but that doesn't make good David vs. Goliath headlines.

D.C.'s NBC affiliate interviewed the sad gardeners ("Community Garden Threatened"), and didn't even bother to include an on-camera statement by the Scottish Rite.

The Washington Post at least presented the other side by speaking with HOT attorney Barbara Golden.

From "Garden to close for Masonic temple renovation" by Larissa Roso:

Temple officials say they had no choice but to close the garden because the renovations are so urgent. The historic building is nearly a century old. Construction had began in 1911 and lasted until 1915.

The garden, which opened in 1990, was never just a place to plant seedlings. Families held barbecues. A neighbor who’s an art teacher takes students there to paint.

“There’s a lot more to it than just growing things,” says the Temple Garden association’s president, David Rosner, who became a member in 2006, after four years on the waiting list. “This is part of people’s lives.”

Annie Nash, who describes herself as a “city girl,” knew little about the growing season, light and soil composition on her first day working in the garden in 1999. Now she is taking horticulture classes offered by the Department of Agriculture.

“I usually go there in the morning or early afternoon on the weekend, thinking I’ll be there an hour or two,” Nash said in an e-mail after reflecting on the garden’s meaning to her. “Six or seven hours later, I realize that I’ve had a great day planting, weeding, or harvesting, and meetings members of the community or folks who just walk by asking about it.”

For Tom Mayes, who has had a plot at Temple Garden since 1998, the experience has brought moments of pure joy — the first goldfinches in late spring and the sunflowers still blooming in September, “brilliant against the clear blue skies.”

“The rosemary bush in my plot is the oldest thing there,” he said. “I’ve used it in hundreds of recipes, but the most frequent is the homemade focaccia. I love the smell of that plant as I brush past it. And I note that, in the meaning of plants, rosemary is for remembrance.”

Golden, the lawyer, said the House of the Temple kept the garden long after it was required to. In 2001, after a long judicial process, the D.C. Council approved the closing of an alley in the center of the property on the condition that temple keep the community garden open for at least another five years.

“Which we did,” Golden said. “And, in fact, we kept it beyond that. We wanted to be a good neighbor. We weren’t doing anything different in the building. We weren’t planning these renovations. We didn’t need it. Now we do.”

The House of the Temple sent a letter to Rosner on April 9 to inform him that the garden would close this year.

Golden said the gardeners will have time to make new arrangements. The closing date is more than seven months away: Nov. 30. Rosner and Kemp said they intend to ask the temple for a meeting to discuss the closure.

“We are going to ask them to reconsider and if there’s anything we could work out,” Rosner said. “Our primary message is going to be, thank you for what you’ve done for us. The secondary is, is there anything we can do? Are there alternatives we can explore?”

If a compromise can’t be found, the group will look for places where it can relocate and start a new garden.

Read about the "Rebuilding The Temple" project here.

Photo from the Washington Post.
Posted by Christopher Hodapp at Tuesday, April 19, 2011