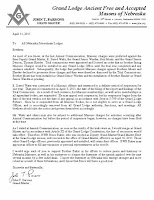 A flurry of accusations, charges, counter charges, trials and other assorted brouhaha has surrounded the Grand Lodge officer's line in Nebraska since late last year. The short version is that Edward David Watts, who was Deputy Grand Master in the grand lodge line of succession last year, was arrested in November after a violent altercation at his girlfriend's home. He was subsequently charged by the Lancaster County Attorney in Lincoln with four felonies: first-degree assault, strangulation, terroristic threats, and use of a weapon to commit a felony.

In the aftermath of these events and in light of the seriousness of the charges, Grand Master Parsons remained in his position temporarily after the annual communication, until Masonic trials could be properly conducted. This led to some noisome accusations of power grabs and impropriety in some quarters that have aired online. Some of this back and forth sniping has been discussed on the Masonic Information website.

As most of you know, at the last Annual Communication, Masonic charges were preferred against the then Deputy Grand Master, E. David Watts, the Grand Junior Warden, Rex Moats, and the Grand Senior Deacon, Thomas Hauder. Trial commissions were appointed and I issued an order that no brother facing Masonic Charges would be installed in any Grand Lodge Office until the trial was completed and any sentence satisfied. Subsequently, the lodge that preferred Masonic charges against Brothers Moats and Hauder declined to prosecute those charges and they were therefore dismissed by the Trial Commissions. Brother Moats has been installed as Grand Senior Warden and the installation of Brother Hauder as Grand Junior Warden is pending.

E. David Watts was convicted of a Masonic offense and sentenced to a definite period of suspension for one year. That period commenced on April 6, 2011, the date of the filing of the report and findings of the Trial Commission. As a result of such sentence, his Masonic memberships, as well as his memberships in all appendant bodies, are suspended. He may appeal such suspension, but his suspension begins from the date of the trial verdict, not the date of any appeal, in accordance with Section 3-709 of the Grand Lodge Bylaws. Since he is suspended from all Masonic Bodies, he is not eligible to serve as a Grand Lodge Officer, and is accordingly removed from all Grand Lodge authority, functions, and meetings. All brethren should take due notice and govern themselves accordingly.

Mr. Watts and others may also be subject to additional Masonic charges for activities occurring after Annual Communication but before the period of suspension began, however, no charges have been filed at this time.

As I stated at Annual Communication, as soon as the results of the trials were in, I would resign as Grand Master and in accordance with Article XI of the Grand Lodge Constitution, the line of succession would take effect. Therefore, RWB Bruce Baker, who was elected as Deputy Grand Master/Grand Master-Elect at the Grand Lodge session, will succeed to the office of Grand Master, effective on April 16, 2011. Those other Grand Lodge officers, previously appointed and installed, will retain their offices. RWB Baker may appoint an officer to fill any vacancies or personal representatives as he sees fit.

I would urge each of you to support Brother Baker in his efforts to restore peace and harmony to Nebraska Masonry, as well in his endeavors to cleanse the fraternity of the tarnish applied over the past several months by a few individuals. I know the fraternity in Nebraska will emerge stronger and more robust as a result of these tribulations, and I know that Bruce will have a good year.