Flash! GL of Louisiana Votes in Favor of Prince Hall Recognition... Sort Of 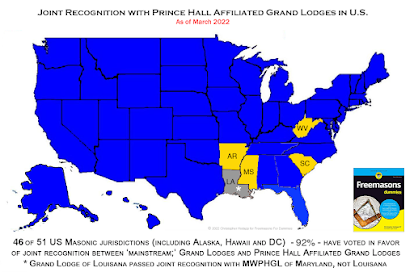 by Christopher Hodapp
NOTE: This story will be updated as more details are received.

This afternoon at its 211th Annual Communication in Lake Charles, the Grand Lodge of the State of Louisiana F&AM successfully voted in favor of joint recognition with a Prince Hall (PHA) grand lodge, which reduces the number of states without reciprocity of recognition down to just four now.

However, the voting members of the Grand Lodge of Louisiana decided NOT to recognize their own state's Prince Hall counterpart at this time. Their decision was based upon the preponderance of evidence of ongoing irregular activities carried out by the Most Worshipful Prince Hall Grand Lodge F&AM of Louisiana (established in 1869) and its MW Grand Master Ralph Slaughter.
I've been told that GM Slaughter has allegedly issued charters outside of Louisiana in jurisdictions of other existing regular grand lodges with already established territories, which violates Masonic ground rules involving regularity and recognition. I'm still seeking clarifications of that.
With this development in mind, I can't really say "And then there were four..." regarding amity agreements between mainstream grand lodges and their Prince Hall counterparts, but I can take them off the list of the last holdouts in the U.S. So I made Louisiana a neutral gray color on the map for the moment.
The last four remaining states without any recognition between mainstream and Prince Hall (PHA) grand lodges whatsoever are: Arkansas, Mississippi, South Carolina, and West Virginia.
This story will be updated.
Posted by Christopher Hodapp at Saturday, March 26, 2022