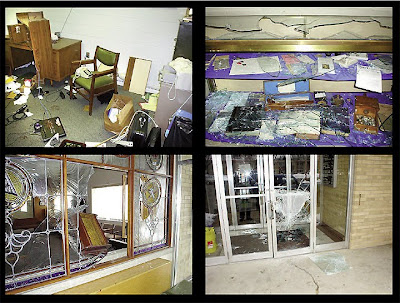 The February 2010 online edition of the Wisconsin Masonic Journal popped into my email inbox last week, with distressing news. The Lake Masonic Center in Milwaukee was extensively vandalized on January 9th, in what can only be described as a maniacal frenzy.

Photos show that doors, windows, stained glass, display cases, and even the lodge's organ were broken, smashed or otherwise damaged. Priceless items that cannot be replaced were lost.

The center was home to Lake Lodge No. 189; Damascus Lodge No. 290; Aloha Conclave #4, True Kindred; Electa Chapter #75 O.E.S.; Ivanhoe Commandery #24 Knights Templar; Faith Shrine #23, White Shrine; Vega Chapter #26 O.E.S.; Job’s Daughters Bethel 6 and the Milwaukee Bible Study. The building is now closed, but WBro. Don Jensen, PM of Lake Lodge, is quoted in the article as hoping to reopen by March 1st. Given the damage and losses, that sounds optimistic. In the meantime, area lodges and the Scottish Rite have opened their doors to the various groups.

It seems that the thugs who carried out the attack got a little payback, as there was blood found all over the building, and a trail of blood leading out. Samples have been sent for DNA testing.

Unfortunately, with heightened awareness of Freemasonry comes the downside. If your lodge has no security system in place, now might be a good time to bring it up at your next stated meeting.
Posted by Christopher Hodapp at Wednesday, February 17, 2010