Call for papers for the 12th CMRC conference on “Anti-Masonry”

From Andreas Önnerfors at the University of Sheffield's Centre For Research into Freemasonry and Fraternalism newsletter today: 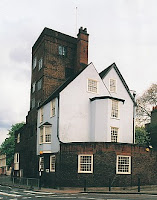 The Canonbury Masonic Research Centre CMRC) in London is pleased to announce a Call for Papers for its twelfth annual conference on the theme of ‘Anti-Masonry’ scheduled for 30–31 October, 2010.

Soon after its emergence in early Hanoverian London, organised Freemasonry earned the enmity of both religious institutions and governments alike, and by the summer of 1738 the association had been proscribed by the Magistrate in The Hague, the French government of Cardinal Fleury, and by Pope Clement XII, in what was to be the first of many Papal Bulls issued against the order. In the wake of the French revolution of 1789, polemicists such as the Catholic priest, Abbé Barruel, accused the Freemasons of helping to bring about these momentous events, and within a few years a Jewish component had been introduced to this heady tale. It was an elaboration that was to have disastrous consequences.

During the nineteenth century Freemasonry also found itself accused of fomenting the European revolutions of 1848 and a highly successful anti-masonic party was established in the United States. By the close of century, the story that Freemasonry was somehow intertwined with Jewish interests (what American historian Gabriel Jackson termed ‘The Black Legend’) had metamorphosed into one of the most outlandish conspiracy tales of all time – The Protocols of the Learned Elders of Zion. This notorious forgery of the Tsarist Secret Police – an imagined blueprint for Judeo-Masonic world domination – was eagerly embraced by the European Fascist regimes, and it helped prepare the ground for the Holocaust as well as the imprisonment and execution of thousands of Freemasons, along with the targeted theft of vast masonic archives, many of which are still being restituted to their original owners today.

In post-war Europe the publication and appeal of the Protocols dwindled, although in the case of Spain General Franco continued to maintain a belief in the existence an imaginary Bolshevik-Masonic complot until his death in 1975. And today, this infamous document is still viewed as genuine in many parts of the world, particularly in the Middle East where it is typically used to justify an over-arching anti-Western rhetoric. But while the anti-Jewish or anti-Zionist aspects of this phenomenon are frequently discussed by academics, the anti-masonic element is all too often ignored.

Consequently, this international conference aims to address this neglected topic in all its aspects. Scholars of all disciplines are therefore invited to submit proposals for papers on a sociological, political, cultural, religious or biographical aspect of this curious phenomenon. Papers can be wide ranging in content or more narrowly focused, however, all should be fully documented as the CMRC plans to publish a volume of post conference transactions. Proposals for papers must consist of no more than 300 words and should be sent in writing to the conference organiser at the Canonbury Masonic Research Centre, Canonbury Tower, Canonbury Place, London N1 2NQ. Please be sure to enclose both your contact details and a potted CV with your proposal.