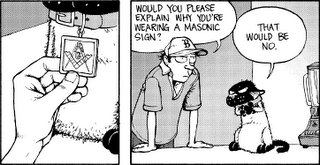 I see England's Rye & Battle Observer is keeping Sussex safe from the scourge of Freemasonry. Reporter Richard Morris has discovered the shocking news that three conservative city councillors in the town of Hastings are *gasp* Freemasons—which he describes as a "clandestine organisation which has at its heart a pledge to help out other masons"— and worthy of a half page of printer's ink.

From the "story", Three Tory Councillors Revealed As Freemasons:

The Observer made the discovery after trawling through council records at the town hall – records which carry details of councillors' outside interests.

Cllr Fawthrop is the chairman of the local authority's planning committee, which is charged with making decisions on controversial applications and large developments.

And his colleague Cllr Lock sits on both the borough council and the county council, where he is head of Transport and Environment.

Part of that role sees him leading the Hastings Bexhill Link Road scheme. However, the Tory hit back at concerns being a freemason may be a conflict of interests with his work as a councillor.

Speaking to the Observer, Cllr Lock said: "Being a freemason is an important part of my life. It is an escape from the very public life of being a councillor.

"The two things are very separate and I do not let them cross over. No mason has ever approached me and asked me to push things through for them. I wouldn't be very happy if they did.

"The Freemasons is a charitable organisation and one which I get a lot of pleasure from being a member of. If however I was working as a councillor and was involved in any form of decision making on either a fellow mason, or the lodge, I would declare an interest and leave the room.

"Over the last ten years the Freemasons have become far more open. We are far from a secret underground movement."

Local Labour leader Cllr Jeremy Birch said he hoped that membership of what he called a "secret brotherhood" would not influence decision making and that there were no councillors who had failed to declare their mason membership.

Thankfully, we don't have to deal with this kind of widespread stuff and nonsense in the US.

Credit where credit is due, Morris does at least, for the first time I've ever seen in a British exposure of Masonic membership, mention interests of other councillors: Greenpeace, Friends of the Earth, the Cuba Solidarity Campaign, and most important, the nefarious Hastings and Bexhill Charlton Athletic Supporters' Club (not certain I'd want to be part of a club that had "athletic supporter" in the name, meself). And extra points given for nary a mention of rolled up trouser legs or dodgy handshakes.