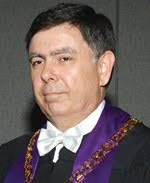 John William McNaughton 33° has served as the Sovereign Grand Commander of the Ancient Accepted Scottish Rite since April 22, 2006. He is a Past Master of Maumee Lodge No. 725, in Fort Wayne, Indiana.

The Degrees of the Chapter and Council will be conferred on Saturday, February 27, 2010 in Bryan, Ohio. The Orders of the Commandery will be conferred at Angola, Indiana on Saturday, March 6, 2010. Casts for the work will come from Ohio, Michigan and Indiana. Many distinguished Masons are expected to participate including M.E.G. Master William H. Koon, II conferring The Order of the Temple.