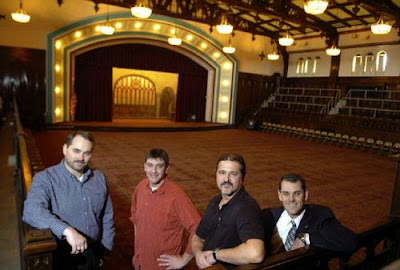 The brethren of Ft. Wayne, Indiana are working hard to preserve and improve the downtown Ft. Wayne Masonic Temple. They made the local paper again today, as they announced great strides in recent weeks. See Masonic Temple Reborn by Paul Wyche in the Journal Gazette.

With regard to increasing rental income - in 2009 we rented the building approximately 12 times. For 2010, we have already booked 28 events with room on the calendar for more. We expect we will far exceed our goals for rental income.

With regard to increasing fundraising - we have resuscitated the Preservation Ball which earned the building about $18,000 in 2007 but which had not been repeated since. A 2009 Preservation Ball is planned for October 23, 2010 and the committee in charge of that event has already met three times in January. We're also working to double our income generated from our second annual Brewfest event. Furthemore we've arranged a temple-wide fundraiser for car-wash tickets which could net the building over $5,000 if all tickets are sold.

Yeah, really.... and no plaster isn't falling off the walls (except where it already was). We kept the building about 55 degrees and only heated rooms to 70 when absolutely necessary.

If you're a member of a Fort Wayne lodge - take heart, we've all had to make some sacrifices, and while it's still early in the year - it promises to be the first year in a long time where we've actually turned a profit.