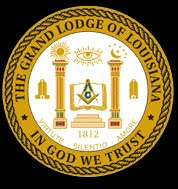 Yesterday, the Grand Lodge of Louisiana, F&AM determined that "technicalities" in the filing of the Prince Hall (PHA) recognition resolution prevented it from being accepted for debate and a proper vote. Some have expressed the opinion that it might have passed with a majority vote by the delegates present.

It was resubmitted simply as a request for the appropriate Grand Lodge Committee to investigate the issue to determine the regularity of the Most Worshipful Prince Hall Grand Lodge F&AM for the State of Louisiana. However, Louisiana Grand Lodge rules are such that a resubmitted resolution on the day of the grand lodge session requires a 2/3 majority vote before it can be considered for discussion on the floor, and presented for an actual vote on its merits. The vote for accepting the resubmitted resolution failed, preventing the PHA resolution from coming to the floor for debate or discussion.

However, last November, the Grand Lodge of Kentucky received a delegation from the MWPHGLofK, which presented a resolution formally recognizing the GLofKY and asked for recognition from them in return.
Posted by Christopher Hodapp at Sunday, February 07, 2010