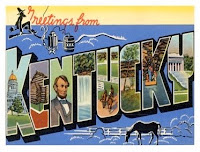 A good brother from Kentucky passed this message along this morning.

As is customary in these matters as I'm sure you well know, a vote was then held by the GLofKY on whether or not to hold it the request for recognition over until the next Annual Communication, and the vote came back in favor of doing so. From reports that I have received, there has for some time been some background chatter regarding this, so their appearance wasn't a surprise to very many in attendance. We have a wonderful new Grand Master, who I suspect follow in the footsteps in the last few we've had and do what he can to assist to push this to a successful resolution at next year's GL Communication.

It is my hope that the long archaic rules that has not permitted Masonic communication with our Prince Hall Brethren will be sent to the passages of time to be lost forever, and we can finally say with one voice that we truly are a Brotherhood of men, under the Fatherhood of God.

Huzzahs to both grand lodges for taking this step, and to Most Worshipful Grand Masters L. Todd Eastham and Hugh R. Harlan Jr., and especially to Past Grand Master Herman M. Forrester, for leading their brethren forward. This fraternity makes great changes with each passing day, as we all strive to live by the precepts and teachings we share around Masonry's altars.

After I received this note, I looked up the history of Prince Hall Freemasonry in Kentucky, and discovered that it originally met across the Ohio River from Louisville in New Albany, Indiana.

A petition was forwarded to the Grand Master of Ohio for a Warrant. It was granted, and on June 12, 1850, in the city of New Albany, Indiana, Mt. Moriah Lodge No.1, F & A. M., was duly organized. The Lodge room was leased for three years from the Caucasian Masons, they having built a new hall and moved into it. Their furniture was also turned over to M. Moriah. For three years, the Lodge remained at New Albany. The members labored under many disadvantages, such as crossing the Ohio River in skiffs at mid-night, sometimes amid high waters and heavy drifts, at the risk of their lives, and then walking five miles up to the city.

At the expiration of the three-year lease, the Lodge moved to Louisville, Kentucky. A house was rented from Washington Spradling, Sr., on Walnut Street, between Ninth and Tenth Streets. The roll of Mt. Moriah increased to over 100 members. Finally, the group divided and organized St. Thomas and Meriwether Lodges.