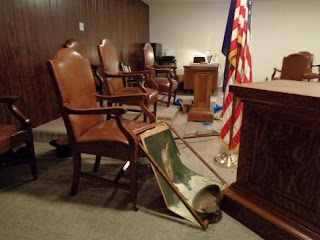 Another lodge has been broken into and vandalized. This time it's Miloma Lodge No. 328 in Ohaha, Nebraska. The brethren are offering a reward for information leading to the arrest of the criminals who did it. From the KETV-Omaha website today:
OMAHA, Neb. —The Miloma Masonic Lodge near 132nd and N streets was vandalized over the weekend.
Their burning tapers were broken as well as their jewels, glass and pictures.
Criminals also left juvenile messages behind, including a symbol in the dust on a television.
The vandals broke in around 2 a.m. Sunday, first trying to get in through a door, then smashing a basement window and crawling inside.
The lodge is willing to pay for information.
"The lodge stands for friendship, brotherly love," Don Connot said. "I would say to them, investigate what we're about. Willing to pay $10,000 for information, so we're ready to go to battle."
The criminals didn't steal anything, according to Connot, other than using Band-Aids because they likely cut themselves during the crime.
Anyone with information about the vandalism should contact Crime Stoppers at 402-444-STOP.
Posted by Christopher Hodapp at Wednesday, January 06, 2016