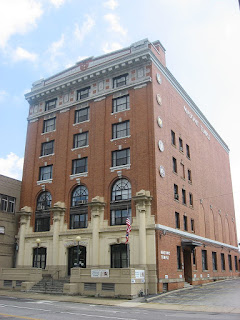 Another tragic loss of our heritage. The downtown Youngstown, Ohio Temple is closing its doors.

Once a thriving city of steel production with a population of 170,000, Youngstown was devastated by plant closings in the 1970s. Freemasonry grew with the prosperity, and sank with the economy. Today, the town has about 80,000 people.

The Youngstown Masonic Temple was built in 1909-10, and was once home to several lodges and appendant bodies. But today, there is only one lodge left - Wick No. 481, and it is the result of the mergers of three original lodges. It is also home to the Scottish Rite Valley of Youngstown. (One listing I found said there were York Rite bodies still there, along with an OES Chapter, but I can't find anything up to date.)


Youngstown has been home to the Masonic Temple on Wick Avenue for 106 years, since 1910. It’s been listed on the National Register of Historic Places since 1997, but will be closing permanently on June 30th.
The temple’s final chili cook-off was open to the public Monday night.  It acts as a fundraiser for the masons, but is not enough to maintain the building.
Those who call Wick Lodge home will be forced to relocate because not enough money is coming in. Members say the six-floor temple is too expensive to operate.
“This is a big building and it’s terribly expensive to heat,” said William Weems, who has been a mason for 53 years.
He says the declining number of members is the main reason the masons are moving.
“I’m sad about it, but there’s no use keeping this building open for 30 people. You just cannot afford it,” he said.
Augie Angel, a member for 47 years, has similar thoughts about the temple’s closing.
“I’m open-minded about it,” she said. “A lot of fellows are disheartened, but I’m being on the realistic side.”
The masons do not know what will happen to the temple. They say the building will have to be sold, but no one knows who the buyer will be.