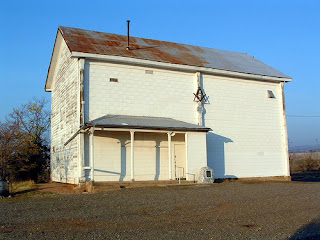 The historic Keystone Lodge No. 161 in Milton, California has been destroyed by a fire that started at 9:00AM Saturday, according to a police report. The cause of the fire is under investigation.

Completion of the Southern Pacific Railroad in 1871 marked the birth of the town of Milton. Named after Milton Latham, one of the railroad's construction financiers, this town was the first in Calaveras County to have a railroad. Freight and passengers continued their journeys to other parts of Calaveras County by wagon and stagecoach.
The town was created after the construction of the rail line known as the Stockton-Copperopolis Railroad and was the terminus for this line. In the late 1880s, Milton was one of Calaveras County's liveliest towns. The rail line from Stockton was originally planned to be extended to Copperopolis, but the market for copper declined after the Civil War and hampered long-term growth in Milton. Rail service declined until it was discontinued in the 1940s.
Today remnants are left of the town, including a Masonic Hall and the Milton Masonic Cemetery. The Milton Masonic Keystone Lodge No. 161 is still in use, and remains in good condition. It was constructed in 1871 as a saloon and later became a town hall before being purchased by the Masonic Lodge in 1881, and was moved from Copperopolis to Milton. In 1962, the Grand Lodge F. &A. M. of California erected a marker. The maker is located in Milton, at the intersection of Flint Street and Milton Road, on the right when traveling north of Flint Street. A map to the marker can be found here. The inscription on the marker reads:
"Keystone Lodge No. 161, F. & A.M., instituted in Copperopolis Dec. 19. 1982, at the height of the copper mining boom. Moved to 1881, to Milton, the terminal of the Stockton & Copperopolis Railroad, which, because of the collapse of copper mining, never reached its intended goal. Dedicated to those who sought to perpetuate the moral teachings of Freemasonry. To them we gratefully acknowledge our debt."
Milton Latham, the town's namesake, served as California's sixth governor in 1860 for a brief time- just five days- before filling in the Senate position as David Broderick's replacement after Broderick was shot in a duel. Latham's governorship has the distinction of being the shortest in California's history.

The lodge celebrated its 150th anniversary in October of 2012.

UPDATE: From a story and photo by Travis Taborek on the Calaveras Enterprise website on 1/25: 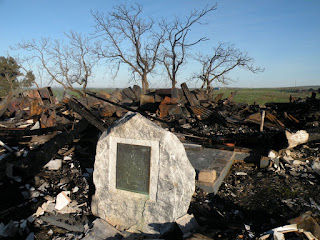 Dennis Huberty, a member of the Keystone Lodge since 1997, said that the building was insured and that lodge members are waiting to hear back from their insurance company before deciding whether to rebuild. Huberty said that in the meantime, other lodges in Calaveras County have reached out to them offering the use of their building.
“It’s a tragedy,” Huberty said, adding that “154 years of history is gone.”
The Keystone Lodge was instituted in Copperopolis on Dec. 19, 1862. In 1881 it was moved to its present location in Milton at the terminal of the Stockton and Copperopolis Railroad.
The Keystone Lodge was home to many irreplaceable artifacts, and was often the target of vandalism and theft, lodge members said. The most frequently stolen item was the Freemason sword used by the Masonic tyler when reciting the tyler’s oath. The most recent sword, made by B. Pasqual of San Francisco, was engraved with Christian symbolism and depictions of the Knights Templar.
Huberty said that if the lodge members decide to rebuild the building, they will do so in the Milton area.
“If we’re going to rebuild, it will be made in Milton,” Huberty said.