Ron Paul: Not a Freemason. Really. 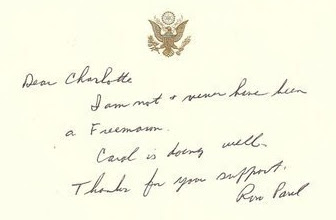 Brother Greg Taylor over on Freemason Information at long last spills the beans about a question that has vexed the Anti-Masonic New World Order harpies for at least five years: Is Ron Paul a Freemason?

After reams of Intertube chatter, YouTube pieces carefully analyzing every Ron Paul handshake that ever appeared on video, and chills up the spine every time he drives past a Masonic hall on a campaign stop, the Congressman and Republican/Libertarian presidential hopeful himself has finally laid the question to rest. Greg is reporting that the Ron Paul fan site, www.ronpaul.com has posted a handwritten note from the candidate, firmly stating, "I am not & never have been a Freemason."