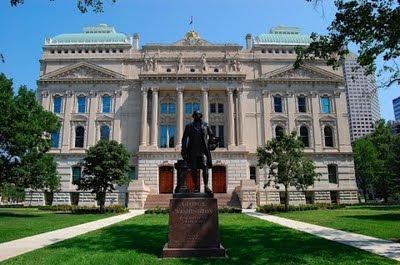 Most Worshipful Grand Master Gregory C. Walbridge of the Grand Lodge of Indiana Free & Accepted Masons invites all Freemasons to participate with him and the officers of the Grand Lodge to celebrate the Masonic birthday of Brother George Washington. The ceremony will take place at the Masonic statue of George Washington that is located on the South lawn of the Indiana State Capital Building on Thursday, August 4, 2011 at 11 AM.

Brethren will assemble at 10 AM in the parking lot of the Indianapolis Valley of the Scottish Rite located at 650 N. Meridian Street, Indianapolis, IN 46204, and will step off at 11 AM sharp in processional to the Statehouse South lawn. The parade route/processional will go from Indiana Freemasons' Hall at North and Illinois Street and travel West on North Street to Capital Ave, South on Capital Ave. to West Washington Street, where it will use the sidewalk to approach the Statue of George Washington on the South lawn. Once at the statue, a ceremony will be preformed honoring George Washington's Masonic birthday, his contributions to Freemasonry, and to the United States.

Ladies and guests are encouraged to meet the processional at the George Washington Masonic Statue on the South Lawn of the State Capital Building. 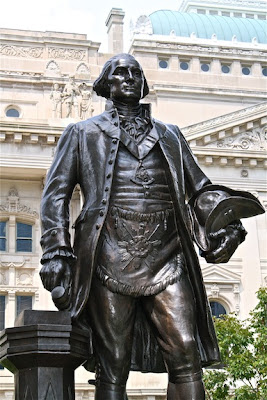 George Washington as Master Mason was sculpted initially from a wax mold at the American Sculptor Donald De Lue's studio in Leonard, New Jersey, and copyrighted in 1959. This sculpture was re-cast in 1986 and dedicated May 19, 1987 by the Grand Master of Freemasons of Indiana, J.C. Paxton of Warsaw, Indiana. The total cost of the gift was $100,000. Lieutenant Governor John Mutz accepted the statue on behalf of the state. The statue is located on the South lawn, West Washington Street side of the State Capital Building.
at 7/28/2011