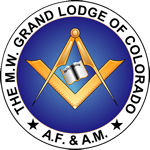 The Grand Lodge of Colorado AF&AM's Library & Musum is located at the GLs building in Colorado Springs, but a portion of its collection is hitting the road this year. The program is a part of the 150th anniversary celebration of the establishment of Freemasonry in Colorado.

Currently, the display is at the Sterling Public Library, and is sponsored by the lodge in Sterling.

Items on display include a walking stick made by William and James Dunlap and carried by Abraham Lincoln, who carved his monogram on the silver head during his 1960 campaign against Stephan Douglas, and a violin owned by Jefferson. The violin was manufactured between the late 1700s and early 1800s and is inscribed "TJ 1824."

There is also information about Masonic United States presidents. Between 14 and 16 presidents were Freemasons, beginning with George Washington and ending with Gerald Ford.

Lincoln was not a Freemason but he maintained the highest level of respect for the institution. He petitioned Tyrian Lodge in Springfield, Ill., for membership shortly before his nomination for presidency in 1860, but withdrew his application for membership because he did not want to win the election because he was a Mason. He planned on reapplying for membership after his presidency.

Jefferson was believed to be active Mason during his life; however, little record of his Masonic activities exists.
Other items on display include a Civil War bone pipe carved by a prisoner of war during the Civil War, a letter from George Washington to the Grand Lodge of Pennsylvania, a picture of Theodore Roosevelt in Masonic dress and a variety of Past Grand Master and Past Master jewels and Grand Lodge officer pins, among other things.

There is also information about the first cornerstone in Colorado, which was laid by the Grand Lodge of Colorado Territory, for the depot of the Denver Pacific Railway Company.

The Colorado program is a unique way to bring Masonry and its history into local communities. The exhibit began touring the state in July 2010 and runs through December of 2011, lasting four to six weeks in each location. Any Colorado lodge that can provide suitable facilities and level of security (an alarm system is required) is eligible to receive the Museum's traveling exhibit.

[NOTE: There is actually no evidence whatsoever that Thomas Jefferson was a Freemason, even though his membership in the fraternity has been claimed off and on many times. There is the distant possibility that he joined the Lodge of the Nine Muses in Paris, but it has never been substantiated, nor have any records been found to definitively link him to Charlottesville, Virginia lodges. Still, many of his closest friends were brethren, as were his son-in-law Thomas M. Randolph, and his favorite grandson, Thomas Jefferson Randolph. And the Grand Lodge of South Carolina held a funeral procession in his honor. Enough question exists that the claim persists. CH]
Written by Christopher Hodapp at 7/26/2011