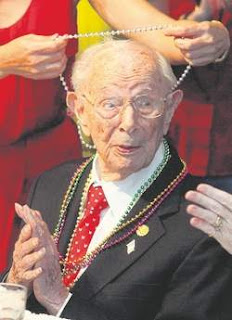 Happy 106th Birthday to W:.B:. Sidney Gilbert from Lakeland, Florida. Bro. Gilbert is a 33° Scottish Rite Mason, a Shriner, and a Brother for over 80 years!

Born in Krupki, Russia on June 30th, 1904, Gilbert immigrated with his family to New York City in 1911. He stayed there until 1946, when he moved to Lakeland, where he went into business with his father-in-law. Over the years, Gilbert owned orange groves and sold tractors, trucks and refrigerators for Franzblau Gilbert Equipment Co. He was married for 42 years to Clara Gilbert, who died in 1976. He was married to Ingrid Katz for 24 years, who also died. He has four grandchildren and two great-grandchildren.

For the record, he is also the oldest member of Kiwanis International.
Posted by Christopher Hodapp at Wednesday, June 30, 2010