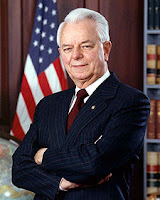 Brother Robert Carlyle Byrd died this morning at 3 AM. Brother Byrd was a United States Senator (D) from West Virginia, from January 3, 1959, until his death, and was the longest-serving Senator as well as the longest-serving member in U.S. Congressional history. He was also the oldest member of Congress at the time of his death, and the first senator to serve uninterrupted for half a century.

Byrd was a member of Mountain Lodge No. 156 in Coal City, West Virginia, as well as the West Virginia Valley of the Scottish Rite (SJ), and the Beni Kedem Shrine in Charleston.

"In the grave all ranks are leveled, all distinctions vanish. While we drop a sympathetic tear in remembrance of our departed Brother, let us cast around his foibles, whatever they may have been, the broad mantle of Masonic charity; and pay to his memory the commendation that his virtues deserve."