The World Cup Soccer matches are going on in South Africa this week, but fans don't generally know that the most popular sport in the world has a Masonic connection.

The origins of modern soccer came from English and Scottish villages. Mob football probably started as a way of celebrating a military victory, as early as the Viking period. The game consisted of crowds madly attempting to get an inflated pig's bladder from one goal to the other, and apparently anything shy of actually murdering each other was permitted. The game was eventually outlawed, but it evolved into an only slightly less violent version for another five centuries.

In the 1820s, the game became popular at English boys's schools like Eton, Harrow, Rugby and Westminster, without the murderous intent. Each school developed its own rules, and the game was played in a field with no boundaries.

Association football was born in 1863 at the Freemason's Arms Pub near London's Covent Garden, at 81-82 Long Acre. Six meetings were held at the pub to decide on rules and structure, and the meetings ended with a split between the new Football Association ("soccer" is said to be a truncated version of "association") and the proponents of different rules that became rugby.

The Freemason's Arms pub was built in 1860 and is still open today. It began life as the Freemason's Tavern, which originally stood where the United Grand Lodge of England's New Connaught Rooms are today on Great Queen Street. London's Freemasons' Hall is literally right across the street. 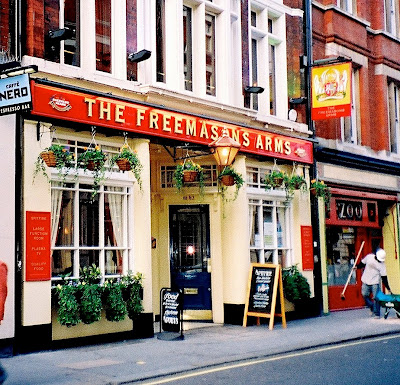 The Switzerland-based FIFA (Fédération Internationale de Football Association) has a video on its website that commemorates the meeting.
(Photos by Christopher L. Hodapp)
Posted by Christopher Hodapp at Tuesday, June 15, 2010