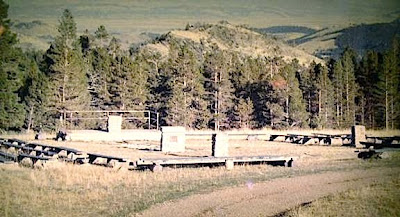 Mullan Pass Historic Lodge No. 1862, near the Continental Divide, was the location of the first meeting of Freemasons in Montana.

A story today in the Billings Gazette reports that the historic site was recently vandalized, for the third time in as many years. According to the article,

The site, in a clearing adjacent to a small spur off Austin Mullan Pass Road, features a podium on an altar and several stone pedestals, lined by plank benches.

Lewis and Clark County Sheriff Leo Dutton said it appeared at least four vehicles were involved in the vandalism. The pedestals were knocked over, and a metal railing around the altar appears to have been chain-sawed and pulled out of place.
“As of right now, we do not have estimates on the cost to repair the site,” he said. 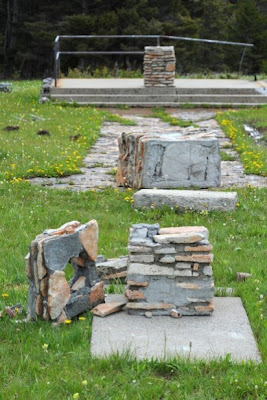 According to Dutton, a caretaker for the site checked it on June 6 and found it fine, with the damage done sometime between that date and his next visit on June 18.

Ellestad said several Masonic groups in the area got together and built the stone fixtures, which are laid out to replicate what would be found in a Masonic lodge. He said the site is used for a meeting once a year, with this year’s event scheduled for late July.

According to Ellen Baumler of the Montana Historical Society, lore has it that three men with the first Fisk Expedition, charged with seeking a northern route across the Great Plains, held the first ever Masonic meeting in the state of Montana at the site near what became known as Mullan Pass on the Continental Divide. The date was Sept. 23, 1862 — more than a quarter-century before Montana became a state.

“Nathaniel Langford was one of them, and he took a walk up there, and there were two others in the group that happened to be Masons,” Baumler said. “That became a pivotal event.”

Baumler said the three men who constituted the beginning of Masonry in Montana were immortalized in the famous and mysterious “3-7-77” that at one time are believed to have symbolized vigilante justice in Montana. The numbers, painted on doors and fences, warned ne’er-do-wells away from the area. Today the numbers appear on the patch of the Montana Highway Patrol and the Montana Air National Guard.

Dutton said anyone with information on the crime can call 447-8245.

As for the curious number "3-7-77" that appears on Montana's Highway Patrol badges and its connection with the early vigilante movement and Montana's Masons, see Tim Bryce's article MONTANA 3-7-77 – How Freemasonry tamed a territory.
Posted by Christopher Hodapp at Wednesday, June 23, 2010