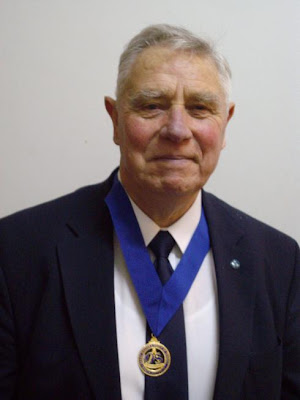 Respected Australian author, W:.B:. Tony Pope was invested with the Grand Master's Order of Service to Freemasonry, for special service to Freemasonry, at the meeting of South Australian Lodge of Research No. 216 held last Friday evening, 25 June, by MWBro. Rob Casson PGM on behalf of the MW Grand Master of South Australia and Northern Territory. This honor is rarely conferred.

Bravos, huzzahs and congratulations to Brother Pope for this singular and well-deserved honor.

The citation reads, in part:

After his retirement, in mid 1990's Tony moved to Murrayville, Victoria, as his wife, a nurse, had secured a position there. From 1999 he served two terms as Master of the Murrayville Lodge, UGL of Victoria, and was Master when that Lodge closed in 2001. Subsequently, on the retirement of his wife from nursing, they moved to Tailem Bend where he joined Lodge of Fortitude in about 2000. He served as Treasurer of SALoR for 3 years from October 2000 and one year as Secretary of the Lodge of Fortitude from May 2004.

Around 2000 he was appointed Representative at the Grand Lodge of South Australia of the MW Prince Hall Grand Lodge of Ohio, resigning that position when he left to live in Queanbeyan (near Canberra).

Tony Pope is an outstanding and distinguished researcher into Freemasonry, with high and rigorous standards as an editor of Masonic publications. He was editor of four volumes of the Transactions of SA Lodge of Research. In 1992 Tony Pope was one of the founding officers of what is now the Australian and New Zealand Masonic Research Council (ANZMRC), an association of the Masonic research bodies and lodges of Australia and New Zealand and with associate members in Europe, Africa, the Americas, India and SE Asia. Tony edited all ANZMRC books from 1993 until 2008, and conceived and continues to edit "Harashim", the quarterly Masonic newsletter of ANZMRC, now in its 14th year.

In recent years Tony has undertaken two overseas trips during which he met with Masonic researchers in France, England and the USA. More recently, in October 2009 W.Bro Pope was one of four overseas speakers at a symposium conducted in Ankara for the centenary celebrations of the Grand Lodge of Turkey. The symposium topic was `Freemasonry and Brotherhood'. Tony Pope's paper `Brothers under the skin' was about racial segregation in North American Freemasonry. His paper outlined the defects of the current system of recognition between Prince Hall and mainstream grand lodges, and pointed to actions by Grand Lodges in Australia and New Zealand which have rejected notions of territoriality and recognition imposed by other Grand Lodges, thus asserting their own sovereignty, namely: the admission of Prince Hall Masons regardless of whether the Grand Lodge is `recognised'; the recognition of the Prince Hall Grand Lodge of Georgia by some Australian Grand Lodges, despite the fact that PHA Georgia lacks USA mainstream Grand Lodge recognition; the adoption by South Australia of the `when in Rome' rule, allowing its members to visit `recognised' lodges which have `unrecognised' visitors; and the recognition by South Australia of both the Grand Orient of
Italy and the Regular Grand Lodge of Italy (which do not recognise each other).

Thanks to Richard Num for posting this information.
Posted by Christopher Hodapp at Wednesday, June 30, 2010