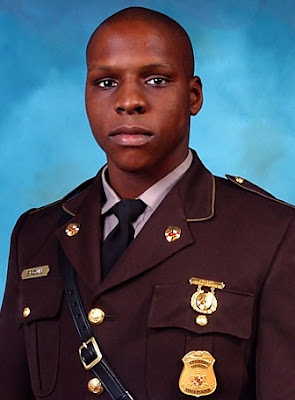 WBro. Jeff Ballou is reporting on several discussion groups that Maryland State Trooper and Brother Wesley W. Brown (photo) was murdered Friday morning outside of the Applebee's Restaurant in Forestville, MD. Bro. Wesley was just 24 years old and a 3 1/2 year veteran with the State Police. He was a member of Fairmont Lodge #92 of the MW Prince Hall Grand Lodge of Maryland. He was just raised last year and had recently proposed to his girlfriend.

In 2007, Brother Brown established a group called Young Men Enlightening Younger Men. His story can be read here. He had been planning to take the group to New York later in the day.

According to an article in the Baltimore Sun, Brother Brown was working as an off-duty security officer at the restaurant, and was shot by a man he had escorted from the building for not paying his bill.

Prince Georges County Police have issued a surveillance camera photo of the suspect. A $50,000 reward is being offered for information leading to an arrest and conviction in this case.

Brown's family announced that there will be a public viewing at 4 p.m. June 18 at Abyssinia Baptist Church in Capitol Heights. Funeral services will be held at 10 a.m. June 19th at Jericho City of Praise in Landover, followed by a burial at Lincoln Memorial Cemetery in Suitland.

His death is untimely and his brethren mourn.

UPDATE from the Most Worshipful Grand Master of the Prince Hall Grand Lodge of Maryland:
The Lodge of Sorrow will be called on Thursday, June 17, 2010, 7:30 PM at Fairmount Lodge No. 92, located at 5501 Addison Road, Fairmount Heights, MD 20743

Masonic Services will be performed on June 18, 2010 at The Abyssinian Baptist Church at 7:30pm. Brothers are asked to arrive by 6:45 PM.