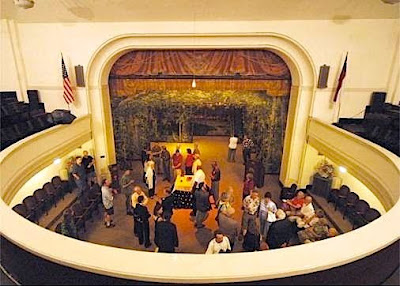 At one time, many of our temples were at the center of our communities, especially the ones built with auditoriums. They were once the location of concerts, plays, traveling speakers, political debates, and even swearing-in ceremonies for new citizens. As our incredible Masonic buildings age and require more care, sometimes we need to think outside of the box about ways to better utilize our spaces, instead of rushing to pitch them overboard. And with a little work, they can be important to our communities again.

The Masonic Temple in Asheville, North Carolina has formed a partnership with a local theatre group that will bring new life to its 1915 building. The Montford Park Players will make their home in the Temple's 270-seat auditorium. The announcement was made Friday by John R. Yarnall, president of the Asheville Masonic Temple, and John Russell, the Managing Director of The Montford Park Players.

According to the article at MountainXpress.com:

“This is an intimate space,” Yarnall said. The theatre allows for amazing “interaction between actors, musicians and their audience and the acoustics are phenomenal,” Yarnall said, adding that The Montford Park Players were the temple’s first choice when deciding whom to offer the space to. Russell, in turn, made a pledge on behalf of the company, promising to “be good stewards” to the theatre.

“Our goal is to completely renovate the building,” Yarnall said, describing why, after so many years of privacy, the temple has decided to open its doors to the public and to local entertainers. He described the building on a whole as a time capsule where “little has been done in 60 to 80 years.” Partnerships such as this will help the temple earn revenue to support their ambition renovations plans, which include painting the ceiling of the theatre midnight blue, decorated with constellations from the Zodiac. “We want to do this building justice by reaching out to the community,” Yarnall said. “We want to bring the community into our home.”

There are 48 backdrops, all hand painted by Chicago artists Thomas Gibbs Moses, hanging in the eaves and rafters above the theatre (which haven’t been moved since 1915). The paintings and elaborate six-piece sets were “used for Masonic rituals” by the Scottish Rite, a branch of the masonic order. When walking into the space for today’s announcement, a landscape painting set the scene: Green earth and palm trees run into dark, ominous mountains and the two worlds are separated by a winding river. Yarnall described the backdrop as “Eden fading into less-than-Eden.” These backdrop are visually stunning, and will add to the dimension an quality of the Montford Park Players’ performances.

The groups are incorporating a dinner with the shows, since the Temple features a large banquet hall and commercial kitchen. Under the agreement, the Temple will receive a portion of ticket sales as their rental fee, and all rental fees will be placed in a fund designated solely for the renovation of the Temple. 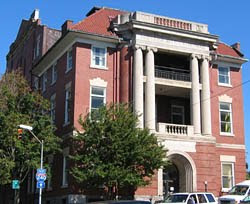 According to a listing from Asheville's registry of National Historic Places, the 1915 Masonic Temple is the only fraternal building in town that still retains its original use. The first floor includes offices, fireproof vaults for lodge records, lodge rooms, banquet hall, massive fireplaces and iron columns, while the second and third floors are used for lodge meetings and the Scottish Rite.

In the years following the completion of the Temple, Mount Hermon Lodge realized Asheville was becoming a health resort, and a committee of doctors suggested that sojourning sick brethren be given attention, which led to the foundation of Asheville's Good Samaritan Mission. The Lodge set an example for the Mission in 1918, during the terrible Spanish influenza that swept through the country, when the members turned over their entire lodge as a hospital for ailing African Americans in Buncombe County.

The Temple's architect was Richard Sharp Smith, a British-born Freemason who was hired to supervise the construction of George Vanderbilt's nearby Biltmore Castle. The basement and first floor includes a reading room and library, secretaries' offices, lobby, dining room and kitchen. (At one time, the basement housed a bowling alley, but today has a a small lodge room where pieces of logs are used for pedestals and saplings for staffs, with wicker furniture believed to be older than the building. The second floor space is for the lodge and York Rite bodies, while the third and fourth floors contain the auditorium for the Scottish Rite.
Posted by Christopher Hodapp at Friday, June 25, 2010