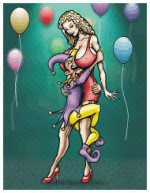 Retired sheriff's deputy Michael Lesinski is the fourth public official convicted in connection with the ongoing federal investigation of the Royal Order of Jesters in Buffalo, New York. On November 19, 2010, Lesinski pleaded guilty to concealing a felony.

From "Ex-deputy admits hiding crime" by Dan Herbeck in the Buffalo News:

Michael Lesinski, 50, of Lake View, admitted in federal court that in April 2005, he transported "approximately six or seven" prostitutes from Buffalo Niagara International Airport to a hotel in Niagara Falls, Ont., where the Jesters were having a convention.

According to court papers, Lesinski was a member of the Jesters' Buffalo chapter, which included a state judge, a former Lockport police captain and a former state court official. All previously took guilty pleas in the case.

Authorities said Lesinski, who has since retired, was still active as a road deputy at the time of the off-duty incident involving the prostitutes.

"[Lesinski] pleaded guilty to misprision of a felony, which is basically concealment of a felony crime," said Rodney O. Personius, the former deputy's lawyer.

Lesinski is the fourth former public official to be convicted of a crime in connection with the Jesters probe, which was conducted by FBI agents and the Western New York Human Trafficking Task Force.

In August 2009, retired State Supreme Court Judge Ronald H. Tills, 74, was sentenced by Skretny to 18 months in prison after admitting that he coordinated the procurement of prostitutes for several Jesters events. Skretny called the former judge's conduct "disgraceful."

Former Lockport Police Capt. John Trowbridge was put on probation for two years after taking a guilty plea in the case, and Michael Stebick, a former Erie County prosecutor and state court law clerk, was sentenced to four years of home confinement after also pleading to a crime.

National leaders of the Jesters, a national organization affiliated with the Masons, have repeatedly said they were shocked to learn that members of the Buffalo chapter were employing prostitutes at their gatherings.

Email ThisBlogThis!Share to TwitterShare to FacebookShare to Pinterest
Labels: Jesters