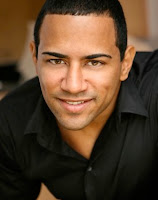 After conflicting reports on Tuesday, details of a bizarre and tragic murder in New York are coming forth with some strange Masonic references. The suspect, Michael Brea (photo) is referred to as a "low-level Freemason," and he is accused of murdering his own mother with a Masonic sword.

From a story in the New York Post that was revised several times throughout the day:

A hardworking Brooklyn mother was hacked to death early this morning allegedly by her sword-wielding, bit-actor son during a bizarre religious meltdown in which he screamed Bible passages and made obscure references to Freemasonry, police and witnesses said.

Greg Clare, who lives downstairs from victim Yannick Brea, 55, shared with her son Michael Brea, a 31-year-old actor and low-level Freemason who had roles in "Ugly Betty" and the movie "Step Up 3D," said he first heard screams about 1 a.m.

Another neighbor said Brea kept calling for the "architect of the universe," a term used by Freemasons to refer to a supreme being. And a police source said the murder weapon was a three-foot ceremonial Masonic sword.

ABC and some other news outlets first reported the sword was a "samurai" sword, and there was no reference to the "architect of the universe." No word yet where Brea was supposedly a member, and the phrase in the article, "low level Freemason," is a curious one. While some reports said the victim suffered head injuries, earlier in the day officers on the scene described an "extremely bloody" situation and said she had been decapitated.

Police tasered Brea and transported him to a nearby hospital for a psychological exam. Brea had no previous arrests, police said. According to his online bio at BelFilm.com, Brea's parents were Haitian, and he enthusiastically adopted Haitian culture. He opened a Subway restaurant in NYC in 2007, and seemed to have a strong public sense of charity. He also has a background in martial arts.

It should be noted that, despite the phrases in the press (and a scene in Dan Brown's "The Lost Symbol"), mainstream U.S. Freemasons don't as a rule use a "ceremonial sword" in lodge. The officer who sits outside of the lodge door, known as the Tyler (or Tiler), does guard the entrance with a sword, but general members do not usually own them, or use them in Masonic lodge rituals and ceremonies. However, some appendant organizations, like the Masonic Knights Templar, do use them in their ceremonies, though not in anything that could be remotely considered violent or menacing.

Frankly, anyone can buy a sword with Masonic symbols on it, and they are commonly available all over eBay and the Internet.

It should also be cautiously pointed out that Brooklyn has several irregular, "clandestine" Masonic organizations, including one that purchased the popular, high-profile concert venue, the Brooklyn Masonic Temple. (The group is called The Empire State Grand Council A&A.S.R.M., a predominantly black group with no ties to Prince Hall Freemasonry). The Phylaxis Society's Commission on Bogus Masonry lists no fewer than eleven clandestine "grand lodges," plus a couple of OES "grand chapters," at work in Brooklyn alone.

No one has publicly claimed Brea as a member at this point.

Yannick Brea, 55, was found kneeling - as if offering a final prayer - after she was butchered during her son's demented diatribe about repentance, police said.

The suspect, still in full "fire and brimstone" babble when carried out on a stretcher, was clutching his Bible and a Masonic ceremonial sword when cops busted into a bedroom, police sources said.

"He yelled, 'The greatest architect in the universe!' " - a term sometimes used by Masons for God - while he was being taken away, said neighbor Sydney Clare, 15. "He looked crazy."

Brea's uncle said his nephew, 31, apparently took the ceremonial sword with him while leaving a Masons meeting late Monday night. A rattled Martial Brea said his nephew was typically a smart, quiet man.

"Something happened that made him do it," the uncle told The News. "The Devil entered him."