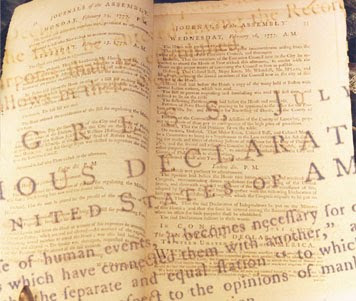 The Remnant Trust, an Indiana public education foundation that shares a collection of more than 1,100 original and first edition works dealing with the topics of liberty and dignity, will conduct community open houses in its new Winona Lake, Indiana location on December 4 and 5, 2010.

The Remnant Trust has moved its headquarters from Jeffersonville in southeast Indiana up to Winona Lake in the north-central part of the state, on the campus of Grace College and Theological Seminary. The Trust has moved into the former Billy Sunday Museum space (which has itself moved, as well).

The Remnant Trust’s collection includes the Emancipation Proclamation and writings from authors like Thomas Paine, John Locke, Thomas Hobbes, John Milton and Ralph Waldo Emerson. It owns some of the first copies of the Magna Carta, early printings of the United States Constitution and the Declaration of Independence, and one of only two existing copies of the ancient Book of Enoch. (The photo above is of the 1777 third Dunlap printing of the Declaration of Independence, and the only known copy in a private collection). The collections will be on public display at select times at Grace and will tour other universities around the country. The collection is often loaned to colleges, universities, and other institutions for display and research by students, faculty, scholars and the general public. 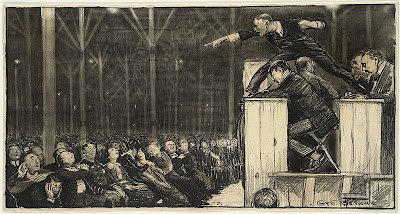 As for ardent Billy Sunday enthusiasts, Grace College moved their exhibit over the summer, and provides tours of the nearby Billy Sunday home, which is still furnished exactly as his widow, Helen "Ma" Sunday, left it. Sunday was an early 20th century firebrand evangelical preacher, whose biggest accomplishment was promoting the passage of the 18th Amendment in 1919, starting Prohibition. Have a toast with your favorite adult beverage next Sunday (appropriately) December 6th, which is the anniversary of the repeal of Prohibition in 1933.
Posted by Christopher Hodapp at Tuesday, November 30, 2010