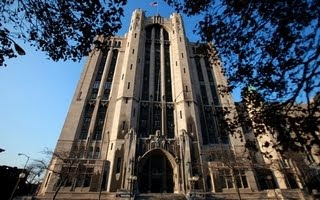 I have known this for a while, but the news hit papers yesterday. The deal that was the lifeline for the Detroit Masonic Temple has come to an end. The hope was that the Ilitch participation would revitalize the theatres and spur new development in the troubled Cass Corridor, which is off the beaten track from the downtown entertainment centers. An Ilitch-owned casino is just three blocks away from the Temple, and the dream was that the road between the two would be revitalized. Sadly, not in this economy.

Unfortunately, the Scottish Rite and the Shrine both abandoned the magnificent building several years ago, leaving the lodges and York Rite bodies on their own to maintain it, pay the utilities and taxes.

What comes next for the biggest Masonic building in the world is anyone's guess. If you have never visited the Temple, make the effort.

Olympia Entertainment said today it has ended its deal to operate the Masonic Temple, one of Detroit’s oldest show and concert venues, but owners of the facility say they will keep it open.

The entertainment company owned by the Ilitch family said in a statement released late this afternoon that it opted several months ago not to renew a contract to operate the facility after a two-year deal expired.

“During management of the venue, Olympia invested millions of dollars in the operations of the facility, including paying off and restructuring debt on behalf of the Masonic Temple Association,” the company said. “Olympia also worked diligently to book and promote entertainment acts and private events at the venue. We stepped into a very difficult situation and did our best, but unfortunately the business climate did not support continuation of the agreement.”

Olympia said it has continued to help manage and book events since the agreement ended in April. What’s next for the venerable facility that’s hosted shows and concerts, weddings and proms since 1926 wasn’t clear.

The Masonic Temple has two major theaters seating 4,300 and 1,500 respectively and ballrooms for up to 1,000 people.
Members of several Masonic clubs that own the building want to keep it open, said Dr. Bisham Singh, who is worshipful master of the Detroit Lodge No. 2, the city’s oldest Masonic group.
“We are hoping we can continue to have a house for the Masons and continue to host shows in Detroit,” said Singh of Chesterfield Township, a Detroit Medical Center physician.
“There's no truth to us mothballing the building,” said Roger Sobran, president of the Masonic Temple Association.