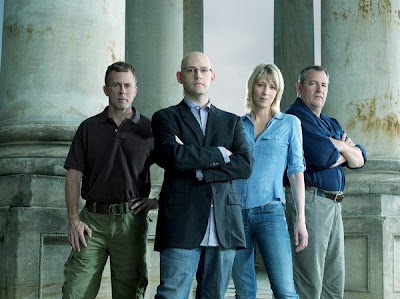 Last December, Alice and I were hired to develop a ten episode series for the History Channel. Tentatively titled, "Decoded" (not our choice - it came with the project), the idea was to explore some of the more mysterious monuments, buildings and artifacts in America, from a different point of view. Our concept was to borrow from the structure of the classic James Burke PBS series "Connections" to show how one seemingly insignificant thought or idea or symbol led to another and another, to finally get you to the Statue of Liberty, and so on. We spent three months providing research, stories and episode outlines, and novelist Brad Meltzer ("Book of Fate") was hired to headline the show.

From an article in today's Washington Times:

In 1792, the very first piece of the White House was laid down in a Masonic ceremony. Within 24 hours, it mysteriously went missing. For over 200 years, everyone from Harry S. Truman to Barbara Bush has looked for it, but to no avail.

Truman literally tore up the White House looking for it. He went as far as gutting the entire interior of the presidential home to search for the long lost relic. “It's the first piece of the White House and how is that no none knows where it is,” asks Meltzer.

What was so special about the first cornerstone? Was it hollow? I so, what was inside, a time capsule or maybe something of even more historical significance?

The series premiere attempts to answer those riveting questions. And there’s even an appearance by history’s most notorious secret society, the Masons.

The Freemasons are central to the plot of the premiere episode, and it was an idea that grew out of the suggestion from the head of the network. “I owe the whole show to the Masons. The head of the History Channel read my book (“Book of Lies”) and said, ‘we should do a show about this,’” recounts Meltzer.

“What I want to accomplish with ‘Decoded’ is to separate what’s truth and what’s myth. Freemasons are always portrayed as bad guys but they were incredibly helpful, they couldn’t have been easier to work with,” recalls Meltzer.

“What I want to accomplish with ‘Decoded’ is to separate what’s truth and what’s myth. Freemasons are always portrayed as bad guys but they were incredibly helpful, they couldn’t have been easier to work with,” recalls Meltzer.

Along for the historical cold case adventure is an investigative field team of comprised of an attorney, Scott Rolle, a mechanical engineer, Christine McKinley, and a journalist, Buddy Levy. Meltzer appears in more of an explanatory and narrative role while the research team beats the streets for clues.

“I didn’t want to be on TV at all. Who wants to see me? Trust me, there’s no one nerdier in regards to geeky historical mysteries than me, you don’t need me on screen,” explains Meltzer.

The subject matter of each episode increasingly gets better and better with upcoming stories about the mummified body of John Wilkes Booth, secret codes transmitted between Thomas Jefferson and Lewis and Clark and the true meaning behind the torch of the Statue of Liberty.

I make no claims or promises for the show. Our participation ended after the initial episode proposals, but if it stays even a little bit close to what we offered, it should be something more involving than the same old hoary "map in the streets of Washington" fare.
Posted by Christopher Hodapp at Tuesday, November 30, 2010