Ales of the Revolution

Looking for a special potable to serve among Masonic brethren at your next table lodge (or offsite feast, if your jurisdiction so dictates)? How about beer crafted from the recipes of two of Masonry's most famous brethren, Washington and Franklin?

In 2003, Yards Brewing Company of Philadelphia partnered with the City Tavern — a favorite Philadelphia haunt of the nation's founding fathers — to create Ales of the Revolution, a line of historic beer recreations based on the original recipes of George Washington, Ben Franklin, and Thomas Jefferson. In fact, Yards' brewery is located just a few blocks away from the site of Robert Hair's brewery, where Washington's favorite beer, Philadelphia Porter, was brewed.

Rich and warming with a deep garnet hue, the molasses-based Tavern Porter reflects Washington's admiration of Philadelphia-style porters and follows a recipe Washington used himself, when brewing beer to satisfy his thirsty field officers. 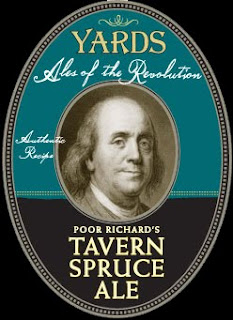 Whether Ben Franklin ever said, "Beer is living proof that God loves us and wants us to be happy" is up for debate. Some say he said it, others say he didn't. No one knows for sure.


Also available is Thomas Jefferson's Tavern Ale, based on his own original recipe, which included ingredients specified and grown on his Virginia estate of Monticello.