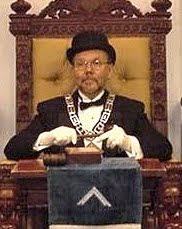 On Friday, my friend and brother, Worshipful Brother Jerry T. Cowley, will be given his 50 year award of gold, in a very unique and special location of his choosing. This might astonish many who know Jerry, as he has the appearance of men half his age, and the youthful exuberance I never possessed even in my teens. He has been a Navy aviator*, and a Past Master of two Masonic lodges, Centre Lodge No. 23, and my own Broad Ripple No. 643, both in Indianapolis. He has been a friend and mentor, not only to me, but to nearly everyone who has joined Broad Ripple for more than 15 years. He has probably signed more petitions than anyone there (including mine in 1998), and has been an inspiration to me for my entire Masonic career.

Jerry is a bubbling font of innovative ideas, and has a cherished belief that lodge should be fun, educational, and most of all, memorable. He has served as Secretary, edited our newsletter, inspired our annual chili cook-off, insisted on picnics and special dinners, organized PM meetings, crafted special awards, created (with WBro. Dick Reed) a unique wooden gavel for each new Master year after year, and encouraged our ongoing relationships with Prince Hall Masons in Indianapolis. I know of few men who have quietly accomplished what he has, without fanfare. He is truly the embodiment of the notion that much can be accomplished when you don't care who gets the credit. His goal is always to help the lodge, support the Master, and encourage others.

Tomorrow he will be awarded his 50 year pin at Crown Hill Cemetery at the gravesite of his grandfather, Bro. Paul Clarke Grimes, who was also a 50 year member of Broad Ripple Lodge. That's the kind of thinking Jerry is known for.

I am proud to call him my friend. Someday I hope to be half the Mason he is.

I am unfortunately on the road this week with no possible way to get back for the event tomorrow. I am with you in spirit, my brother, and will raise a Bombay Sapphire martini to you at 11 AM.

*(I had called him a Navy "pilot", but Jerry informs me that Navy "pilots" putter around with tugboats and such, while "aviator" is a much more appropriate term. The ultimate point is, he was shot off of aircraft carriers strapped into a jet fighter, and managed to plop it back down again on a moving deck more than once, proving it wasn't just an accident. And never once piloted a tug boat. Or hit one, for that matter.)
Posted by Christopher Hodapp at Thursday, November 18, 2010