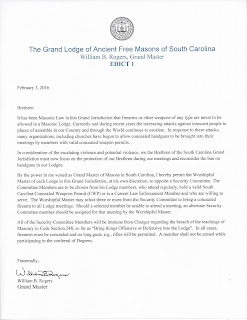 On March 8th, 2004, a newly raised Freemason named William James was shot and killed during a hazing incident that went horribly wrong at South Side Lodge No. 493 in Patchogue, New York. The lodge had its own social group, The Fellow Craft Club, and they had come up with their own unauthorized ritual for joining it that was completely outside of anything approved of by the Grand Lodge. At one point, James was seated in a chair in the basement, and a Brother was to aim a pistol loaded with blanks at him and fire it. Behind him, other Brethren were supposed to simultaneously knock down a pile of metal cans and other objects in order to scare the crap out of him. Supposedly, this was to impart a lesson of trust to the new Brother. Elderly Brother Albert Eid, who was a decorated Navy veteran, then mistakenly pulled a loaded .32 caliber pistol out of his left pants pocket, instead of the .22 pistol loaded with blanks that was in his right one. As a result of his momentary confusion, he shot James in the face, and killed his fellow Mason in this tragic and horrible accident.

The lodge was ultimately dissolved by the Grand Lodge of New York, its members were suspended, and in January 2005, Eid was sentenced to five years' probation by the court. The story was widely reported in the press, repeating over and over that a Mason had been killed by one of their own members while conducting a creepy ritual.

Ever since that horrible incident, Masonic jurisdictions have struggled with the question as to whether or not it was proper to allow Brethren to bring firearms into a lodge meeting, or even onto Temple premises. Grand Lodge rules differ, depending, in part, on federal, state, and local laws regarding open- or concealed-carry, permit requirements, as well as having special exemptions for off duty law enforcement officers. There has also been the uniquely Masonic question that arises as to whether or not the divesting of all metal objects, mentioned in the EA degree ritual to prevent the candidate from bringing anything "offensive or defensive into the lodge," is applicable to all Masons and at all times in lodge meetings.

Recent headlines have complicated the matter, especially in the United States. There have been high visibility school and workplace shootings, and even churches have not been spared from gun violence. The FBI's foiling of a planned attack on the Milwaukee Masonic Center several months ago by a would-be Muslim terrorist have brought the issue to the forefront in many jurisdictions, especially given the anti-Masonic attitudes  and threats of violence by some fundamentalist social and religious commentators in some Muslim countries and communities.

In my own jurisdiction several years ago, a Grand Master issued an edict banning guns from Masonic Temples in Indiana for the duration of his year, after an incident during a Past Master Degree, a prerequisite ceremony for men elected to become Worshipful Master of their lodge here, that has, in many cases, become little more than an excuse to engage in hazing of the incoming Master. The candidate is required, as part of the evening, to demonstrate that he knows how to conduct a Stated Meeting and deal with Masonic law,  motions and amendments, and even handle open arguments between Brethren during a meeting. Two off duty police officers attending one of these degrees staged such an argument, and at one point, both actually pulled out their sidearms and threatened each other, as a prank. The Grand Master heard about it, and was not amused.

The issue is not isolated to the US, either. In one jurisdiction in the Middle East I have been told by several Brothers that the Tyler is openly armed, precisely to prevent attacks such as the one planned in Milwaukee.

Arguments have raged back and forth between those who advocate various bans, versus the belief that citizens may be able to lessen or even prevent gun violence by being armed themselves. These disagreements have no simple answers.

On February 3rd, the Grand Master of the Grand Lodge of South Carolina AFM, MW William B. Rogers, issued an edict that attempts to address the issue in a responsible manner. The Master of each lodge is given the authority to, at his own discretion, appoint a Security Committee from among his own members, and they must each have a valid South Carolina Concealed Weapons Permit, or be a current law enforcement officer in that state. The Master is to permit three or more of these Committee members to bring concealed pistols (not rifles) into lodge meetings, and if one or more is not present, he may appoint other members who fulfill the requirements to do so for that meeting.

The guns must be concealed at all times, and members of the Security Committee are to be exempt from the Grand Lodge rules regarding nothing offensive or defensive being brought into the lodge. However, no one may carry a weapon while participating in the conferral of the degrees of Masonry.

(Click the image above to enlarge and read the actual edict.)

It's a unique solution to the question, and I suspect that more GMs will examine MW Rogers' edict and its results closely in the coming months. One thing's for certain: no one else needs to die in a shooting in a Masonic lodge. Ever.