The GM of GA Responds To Other GL's Actions 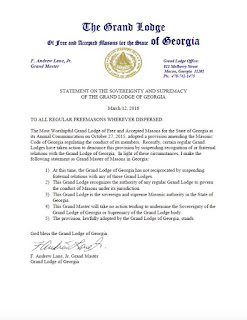 The Grand Master of the Grand Lodge of Georgia, MW F. Andrew Lane, Jr.,, has issued a response to the actions of the GLs of California, the District of Columbia, and the regular Grand lodge of Belgium, who all withdrew amity with Georgia last week in response to their recently adopted rule that prohibited  Masons from engaging in homosexual activity and from co-habitating without benefit of marriage.

In short, Georgia is not withdrawing recognition of anyone, regardless of the action taken against them. And as to the rule, according to his statement, "The provision, lawfully adopted by the Grand lodge of Georgia, stands."

I fear the battle lines have been drawn.

Click the image above to enlarge.
Posted by Christopher Hodapp at Monday, March 14, 2016