The following message was issued this morning by MW Harvey J. Waugh, Grand Master of the Grand Lodge of Massachusetts AF&AM:

Dear Brethren:
By now, word has traveled far and wide about the actions of the Grand Lodges of Tennessee and Georgia. For those of you who have not heard the news, these jurisdictions have recently decided to exclude men from the rights and privileges of Freemasonry on the basis of sexual orientation.
For over 282 years, men free born, of lawful age, and well recommended have been welcomed and accepted as Freemasons in Massachusetts.
Anyone meeting the following primary requirements may petition a Massachusetts lodge for membership:
These requirements have not changed. Freemasonry is a fellowship of friends and brothers who meet together for fraternal relations and association.
A fraternity is defined as a group of people associated or formally organized for a common purpose, or the feeling of friendship that exists between people in a group.
Freemasonry has been and always will strive to be the premier fraternity that meets both accepted usages of the term.
Any action that runs contrary to the common purpose of Freemasonry and feeling of friendship that exists in our lodge rooms runs afoul of the basic tenets of Freemasonry: brotherly love, relief, and truth.
It is of no concern to us whether or not a man is gay, as long as he is free born, of lawful age, and well recommended.
As always brethren, take due notice thereof and govern yourselves accordingly.
Fraternally,

3/26/16: The Grand Master of Illinois, MW Anthony R. Cracco, issued a statement in reaction to the GL of Tennessee vote Saturday morning on the official GL Facebook page (click image to enlarge slightly): 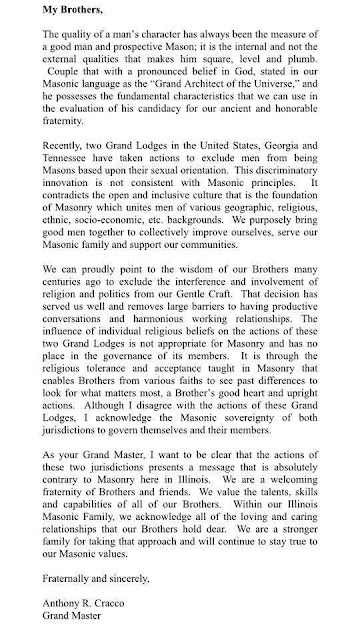