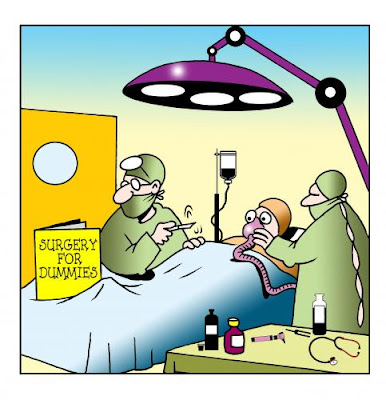 Most of you know by now that I was diagnosed with stomach cancer back in March. (My apologies to Facebook folks who have been following this over there for the redundancy of this message—it posts automatically in a couple of places.)

Docs caught it quite by accident and very early. I've been through 9 weeks of chemotherapy, followed by a month long detox period (because, you know, it's poison). And now today—finally—they wheel me into surgery to remove all, or at least a major chunk, of my stomach (I won't know until I wake up). I'm thinking of the scene in Jaws when they cut the shark open and discover a license plate.

"Aw, you don't need a stomach to live," sez my surgeon, with all of the chirpy good cheer of the guy who gets to keep his. I may have to wrestle him for it. I'll be laying there on the table, gutted like a largish fish, making gurgling sounds, while he's carving up my stomach and discussing lunch.

Everybody discusses lunch at work.

I hate this already.

They say cancer is like a journey. Well, if they mean it's like that dismal Amtrak trip I took in 1976 when the air conditioning failed, the electrical system died, with no fresh water, no dining car, and stuck on a West Virginia siding for 12 hours waiting for a coal train derailment to get cleaned up, then perhaps 'they' are correct.

Barring any surprises that Doctor 'You Don't need A Stomach' might come across this afternoon, I'll be in the hospital for a full week. I'll recover for 6 weeks, and then, long about the time I have a full beard and a head of hair again, I'll get zapped for another 9 more weeks of chemo. My only revenge is to become Beelzebub's satanic patient, which I have every intention of doing.

The good news is that the prognosis is still positive. No one has taken Alice out in the hall and told her to take me skydiving and start hunting the safety deposit box key. Unfortunately, everything has taken much longer than I had hoped, which has given me much way too long a time to read really scary stuff on the Intertubz.

My apologies to the many groups for whom I've had to call off travel plans. I've had to cancel more than two dozen events for the year, and I promise all of you, I'd much rather be with you than doing what I'm doing. Hopefully by October, I'll be back to my curmudgeonly self. Alice and I have been invited to speak in New York City on December 4th at the 92nd Street Y, and I have no intention of missing it.

We both thank all of you for the literally hundreds of cards and letters, emails, phone calls and offers of help over the last few months as this has progressed. I can't adequately express how appreciative I am for all of the kind wishes and prayers from so many folks. Know that they have helped keep us happy and positive, and both of us owe so many of you a debt I cannot sufficiently repay.

Forgive me if I don't answer my phone or email. I'll be on a table with a hose up my nose and strangers peering into my gastrointestinal tract.

While they discuss their lunch.
Written by Christopher Hodapp at 7/13/2011