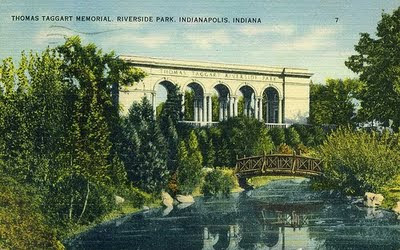 Indiana Landmarks released its annual listing of the ten most endangered architectural sites in the state this past week. Some places appear year after year, some slip away, some are saved, and some are destroyed forever.

For the first time this year, the Thomas Taggart Memorial in Indianapolis made the list.

A monument to one of Indiana’s early leaders needs restoration before it deteriorates beyond repair. In its present condition, the Thomas Taggart Memorial—a limestone colonnade and fountain in Indianapolis’s Riverside Park—is hardly a fitting honor to the Irish immigrant who rose to become mayor of Indianapolis, U.S. Senator, chairman of the Democratic National Committee, and owner of the French Lick Springs Hotel. The Neoclassical landmark was erected in 1931, two years after Taggart’s death.

In a bitter twist, a monument erected to honor the man who originated Indianapolis's city park system now sits neglected and crumbling in one of the parks he created.

As mayor from 1895 to 1901, Taggart created the city park system, acquiring hundreds of acres along White River, as well as land for Brookside and Highland parks, among others. He believed the citizens of the increasingly industrialized city needed green space for reflection and recreation. When he left office in 1901, Taggart bought the French Lick Springs Hotel, which he made a social and political hub of national renown.

The Taggart Memorial fountain doesn’t work, and an unsightly fence surrounds the monument to protect the public from its unsafe condition. Taggart’s Indianapolis legacy—a parks system available to all citizens of the capital city—deserves the honor of a fountain that works and a graceful, safe colonnade. Indiana Landmarks is investigating how private funds might be raised to restore his memorial.


A 2006 design study estimated the renovations would cost $1.3 million, and current estimates run as high as $2 million. Given that the Indianapolis Parks Department's current budget for the entire system is just over $3 million, the City is less than enthusiastic about fixing a limestone monument to a long-dead, long-forgotten man. The park is not in a fashionable part of the city, and the Memorial continues to fall to pieces behind a chain link fence.

Brother Tom Taggart (1856-1929) was member of Mystic Tie Lodge No. 398 in Indianapolis. He was also a Shriner, and was in the first ceremonial class of Murat Shrine in 1885 (along with fellow Noble Lew Wallace, civil war general and author of Ben Hur).


Like most tiny blurbs, that doesn't begin to scratch the surface of the life of Brother Thomas Taggart. He rose from Irish immigrant and manager of the railroad station lunch counter at the Indianapolis Union Depot to become Mayor of Indianapolis and the most influential Democrat in Indiana at a time when Republicans dominated the political landscape of the state. Stories abound of his kindness and generosity in his personal and professional life. And the story of the French Lick Springs Hotel under his leadership is fascinating.
at 5/08/2011