In March, the Grand Lodge of Oregon AF&AM Grand Master Ed Bousquet issued an edict, briefly suspending recognition of the Grand Encampment of Knights Templar USA, over the Rectified Rite imbroglio, but rescinded the edict a week later, in light of "improved dialogue." Grand Master Bousquet has asked for "patience and understanding as the leaders of these organizations attempt to work through the problem."

It appears the dialogue hasn't improved much, and in fact, dialogue has now been outlawed in Oregon.

On April 25th, he issued a new edict, declaring the Grand Priory of the Reformed and Rectified Rite of the United States of America irregular and clandestine. Oregon Masons are now prohibited from joining the Rectified Rite, or of having "any interaction" with any member of the Rite. According to the edict, "This means no Oregon Mason may communicate on Masonic subjects formally or informally by the imparting of thoughts, opinions or information by speech, writing or signs. Any violation of this edict will result in disciplinary action that may result in suspension or expulsion from the Fraternity."

As I am a member of the Rectified Rite, I presume that means Oregon Masons should have stopped reading several paragraphs back, and are now spontaneously bursting into flames. 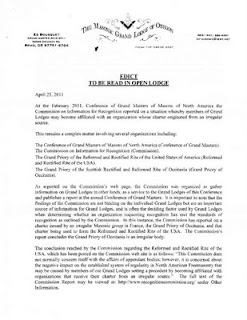 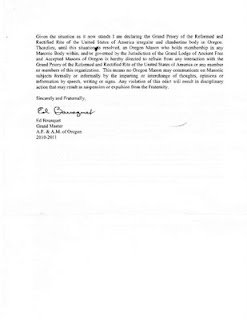