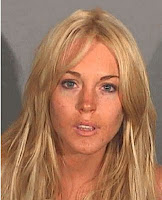 Troubled pop tart Lindsay Lohan is alleging that she is being stalked—not an altogether bizarre assertion for a Hollywood personality to make, surely. As reported on the TMZ.com celebrity gossip website, Lohan, who just can't seem to stay out of professional and legal mishaps, is maintaining that she has video footage and text messages from a way too obsessive admirer who is supposedly threatening to kill her.

The added wrinkle? She says he is a "freemason."

Lilo went on Twitter today and posted a photo of the man allegedly posing the threat -- saying, "This is the freemason stalker that has been threatening to kill me- while he is TRESPASSING! I'm actually scared now."

She continued, "all my fans, my supporters, please stand by me. g-d bless xxL."

We're told LiLo believes the man has been obsessed with her for nearly 4 years ... frequently dropping by her home and leaving weird gifts for the actress. We're also told he's been sending her "insane" text messages for the past few years.

Sources tell us Lindsay does not know the identity of the alleged stalker -- but she wants the cops to help keep the mystery man away ASAP.

I'll just go on the record here that I haven't lived in LA since 1983. And it's a good thing I lost almost 100 pounds and most of my hair, because I don't look a bit like the guy.

But Freemasons DO text message me all the time...

"Lindsay Lohan won a temporary restraining order Thursday against David Cocordan, a man who allegedly has peppered her with unwanted calls and texts since 2009 and believes he has a romantic relationship with the 24-year-old actress.

Cocordan, 38, has phoned and texted Lohan more than 100 times and come to her home at least three times, leaving heart-shaped boxes of chocolates and magazine articles about her with his name written on them, according to court papers. He also has shown up at public appearances she's made, the actress told the court.

Police believe Cocordan may be schizophrenic and off his medication, Lohan said in the court papers that also note that a May 5 text message made the actress fear that he intended to sexually assault her."

Still no clarification on Cocordan's alleged "Freemason" connection.
at 5/17/2011